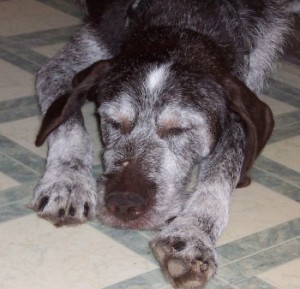 Most people immediately think of a puppy when they are getting a new dog. Those considering the adoption option tend to lean towards a young adult or pup. Dogs with special needs and seniors are often low down on adopter’s priority list and may languish in shelters or spend long periods of time in foster care waiting for homes. Shelters with limited space often end up euthanizing them first as they are the least likely to be adopted out. That’s why it was nice to see actress Lea Michele adopt a senior dog, she has named Pearl.

Many worry that getting a senior means you will lose your dog sooner. If you have recently lost a pet, you are likely still grieving and do not want to repeat those feelings of loss anytime soon. That’s completely understandable but life in unpredictable. Young dogs do become ill and die tragically young. Old dogs sometimes buck the odds and live much longer than anyone would have anticipated. I had a senior German Wirehaired Pointer come live with me at the age of 12 after he had been abandoned at a shelter. I expected I might have him a year. Harry lived another four years and they were great years.

For someone who has a busy work schedule and doesn’t have time to do all the fun stuff like housebreaking that comes with a young dog, an older pet can be a perfect option. Most often they are already completely trained and have passed the crazy years. This means they are ready for long walks and snuggling on the couch instead of racing around the house, knocking things over as they chase an imaginary foe. For less active people or senior citizens, a senior dog can offer a beloved pet that needs less exercise than a younger one would, making him easier to care for.

In choosing to adopt a senior, not only are you likely saving his life but you are also potentially getting the best pet you will ever have. As the saying goes, second hand dogs give first class love.