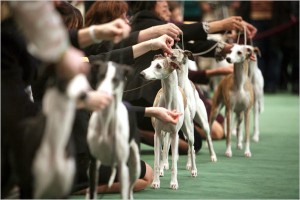 NEW YORK – The Westminster Kennel Club Dog Show celebrates its 136th year of bringing together dogs, owners, and New York for a competition that will have the place barking with excitement on February 13, 14.

This years Westminster Kennel Club Dog Show promises to be as exciting as always, with dogs, handlers, trainers and owners behind the scenes preparing their dogs for the event.  The dog show, held at Madison Square Garden, will be limited to a total of 2000 dogs, quite a few less than in previous years.  “We will have at least two dogs in every breed, including the new ones,” said David Frei, USA Network host and the Westminster Kennel Club’s director.

New this year is the addition of six now eligible to compete breeds of dogs, as decided by the American Kennel Club.  The first of the new breeds is the Cesky Terrier, followed by the American English Coonhound.  Mexico’s hairless Xoloitzcuintli, the Norwegian Lundehund, the Entlebucher Mountain Dog, and the Finnish Lapphund make up the 6 new additions to this years show.

Cesky Terrier – The Cesky Terrier has a long head, bushy beard, mustache, and eyebrows.  The body is solid, but not heavy, and the wavy, silky coat usually comes in various shades of gray-blue with tan, gray, white, or yellow furnishings or light coffee, although the puppies are born black.  The ears are triangular, folding forward close to the head. The head is long, but not too wide, with a well-defined stop.

American English Coonhound – This breed’s coloration can be redtick, bluetick, tricolored and tricolored with ticking.  English Coonhounds are often kept as hunting dogs used to trail and tree animals, primarily raccoons.  They also compete in competition hunts known as “nite” hunts, the largest of which are English Days and Southern English Days which also feature show competitions and water trials.

Mexican Hairless Xoloitzcuintli – This rare, hairless dog breed was among the first breeds recorded by the American Kennel Club.  New to this year’s show you can expect to see a sleek body, almond-shaped eyes, large bat-like ears, and a long neck, and be in shades of black, blue, and red.

Norwegian Lundehund – This breed of dog normally has six toes, all fully formed, jointed and muscled with a dense outercoat and a soft undercoat.  They are able to bend their head backwards along their own spine and turn their forelegs to the side at a 90-degree horizontal angle to their body, much like human arms.  Their pricked, upright ears can be folded shut to form a near-tight seal by folding forward or backward.

Entlebucher Mountain Dog – This dog breed is a square, sturdy, medium-sized dog.  It has small, triangular ears, while the head is well proportioned to the body.  The long jaw is well formed and powerful and the feet are compact to support its muscular body.

Finnish Lapphund – These dogs have a profuse double coat, with a short, fluffy undercoat and a longer, coarse topcoat.  Because of their coat, they are waterproof as well as resistant to extreme cold.  Many Finnish Lapphunds have very distinctive facial markings.  One of the unusual facial markings is “spectacles”, where a ring of lighter colored hair around the eyes gives the impression that the dog is wearing spectacles.

The Westminster Dog Show is considered the second longest continuously held sporting event in the country, drawing people in from all over to watch as dog breeds compete for Best in Show!

Information about the breeds of dogs referenced by Wikipedia.