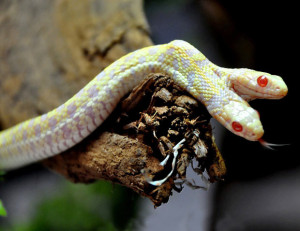 While two heads may sound better than one, that isn’t always the case in nature. Although two-headed animals are rare, they do occur. The condition is known as polycephaly and is usually the result of an abnormality during fertilization or embryonic development. Like conjoined humans and so-called Siamese twins, the same occurs in animals. Unfortunately, these animals often have a shorter life expectancy. In some cases surgery can be performed but, as with humans, it is very difficult. Polycephaly is more common, for reasons unknown, in reptiles. Here are some of the more unique two-headed animals that have occurred in the world.

Deucy is a two faced kitten that was born in Oregon in June. Her mother rejected her, so she is completely dependent upon her owners for feeding and care but does seem to be doing well. Unlike Thelma and Louise, who have two completely separated heads and brains, Deucy’s heads are conjoined. This occurs often enough in cats, approximately one in a million, that they have a term for them – “Janus cats”.

Snakes with two heads are more common than most other animals. There’s a two-headed royal python that lives in a German pet store as well as a two-headed python in a zoo in Sri Lanka. In both cases, the heads are fully formed and completely separated. This can pose some problems when it comes to decisions on which way to go.

Todd Ray, of the Venice Beach Freakshow, actually collects two-headed animals – both live specimens and taxidermied ones. He believes that his is the world’s largest collection of two-headed animals. He has 22 live animals with two heads including two bearded lizards, a hognose snake, an albino hognose snake, king snake, and a turtle. He has to be careful when feeding some of them as there can be disputes between heads over food.

Two-headed mammals often don’t fare as well as reptiles do. Beyond cats, there have also been two headed pigs (both occurred in China), a calf and a lamb. In the case of mammals, both heads are usually conjoined rather than two completely separate heads.

Whatever the cause of these unusual anomalies, they ones discussed above have all been lucky enough to have found families or caretakers willing to do their best to ensure the animals live as long and healthy a life as possible.