Home News Meet Rusty: A Red Panda Who Escaped from His Zoo 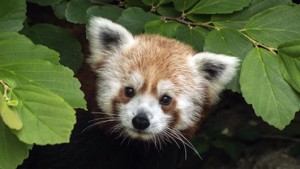 It’s not often a zoo animal goes missing. So, when new arrival Rusty disappeared from his enclosure at the National Zoo in Washington DC, zoo staff were concerned. Rusty is a male red panda just shy of his first birthday. He had arrived at the zoo in April and only been on display for three weeks. Staff had seen him the evening before but at 7:30 am on Monday morning, he was nowhere to be found. While he was up to date on all vaccines and is microchipped with his identifying information, the microchip cannot be tracked. Although red pandas are not normally aggressive, they are wild animals and Rusty was loose in an unknown environment.

The zoo closed its gates temporarily to search the grounds but there was no sign of Rusty and there were no obvious clues to how he had left the enclosure. Although there are many cameras around the zoo grounds, none focus specifically on the red panda exhibit. There have been incidents in the past of people purposefully removing animals from enclosures. In 1983, a teenager was bitten by one of two vipers he was suspected of stealing from the zoos retile house. He was carrying the snakes in a plastic garbage bag on a public bus. The most common escapees are birds that manage to fly away.

The zoo sent the information about the missing red panda out on social media, asking for the public’s help in looking out for the animal. Red pandas are raccoon-like animals although not quite as adventurous and adept as their North American relatives. They are native to China and tend to favor cooler climates. They eat fruit and berries are spend most of their time in trees. It was unlikely that Rusty had wandered far in the opinion of zoo officials.

Then Amanda Foughty, a 29 year old entertainer, was out walking with family when they spotted Rusty in the Adams Morgan neighborhood of Washington. They called the zoo, who quickly sent out a team to bring Rusty home. Thankfully, the red panda is safely back at the zoo and, although still under observation, does not seem to have been harmed by his adventure. Zoo officials continue to investigate how he escaped and are going to make sure his enclosure is Rusty-proofed before he is returned to it.

Rusty is not the first red panda to go on an American adventure. Yin, a resident of the Virginia Zoo from 2007 until she died in 2011, escaped twice in one month after she first arrived in Norfolk, Virginia. Yin was an opportunist, taking advantage of fallen tree limbs and anything else to go for a walk. Hopefully, Rusty`s adventuring days are now behind him and he can get down to the serious business of producing more of the vulnerable species with his new friend Shama.