A dog is a man’s best friend. But are some dogs better suited for the manly men that walk this world? And what exactly is a manly man? Is it the man who tightens lug nuts with his bare hands? Is it the man who chews on barbed wire rather than a blade of grass or toothpick? Is it the truck driving, jeans wearing, country-music listening kind of guy? My gosh, is it Brett Favre?

We all have our opinions on what makes a manly man, which is why we’ve compiled a rather diverse group of top five dog breeds for men. Our dogs range from the kings of the canine, demonstrating their girth, to a much smaller breed, helping to demonstrate that testosterone can have a heart.

1. Man = Power = English Mastiff. What’s in a name? Ah, well, if you’re the mastiff, then power’s in a name. Mastiff comes from “masty,” meaning power. According to Askmen.com, mastiffs were used centuries ago in the sport of bear baiting, because they were one of the few animals alive that could stand up to a bear. Most folks don’t want to mess with a mastiff, based solely on their size. And if their owner doesn’t like someone, chances are they won’t either. So, your daughter wants a pony? Let her have one. You’ll have a mastiff. Chances are your pet will be bigger. 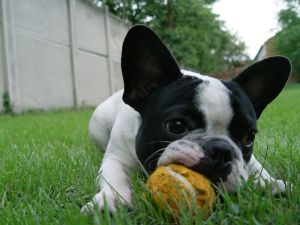 2. Man = Sensitivity = French Bulldog. French Bulldogs are tiny little dogs with a lot more meat on their muscles than, say, a Chihuahua or Pomeranian. They may be tiny, but they’re not fragile. Some folks might say that Frenchies (like other bulldogs) are kind of ugly, but in a really cute way. That’ll win sensitivity points for any man who owns this dog. And here’s a bonus – these little guys love to snore (even when they’re wide awake). So next time you’re blamed for snoring loudly, blame it on your dog.

3. Man = Enforcement = German Shepherd. Who doesn’t love a man in uniform? But what if you’re a man without a uniform? What are you to do? I suppose you could get a German Shepherd, the go-to dog for police departments across the country. Adding a German Shepherd to your pack could help you come across as a true enforcer. But here’s the risk you take by getting a German Shepherd – it might turn out that your dog is smarter than you. These are some pretty intelligent canines. Are you ready for the competition? 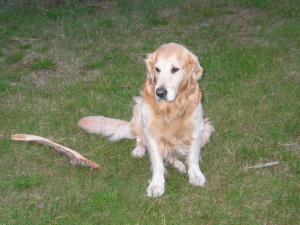 4. Man = Family = Golden Retriever. Nowadays I think it’s fair to say that most people define a man by how well he cares for his family. That doesn’t mean with a paycheck, but with love, support and more. What represents the quintessential family portrait than a Golden Retriever? Time and time again this dog is one of the most popular breeds in America. Last year, the smartphone app Klooff released a survey they conducted showing that Golden Retrievers make men more attractive to women.

5. Man = Total Package = Pit Bull. A manly man should probably be really sensitive, yet strong and bold enough to protect when needed. He should love to cuddle, but won’t whine if you leave him alone. He should be able to move beyond any past baggage in his life without any grudges. In other words, a manly man is a Pit Bull. Sure, Pit Bulls get their fair share of bad press, but the majority of pit bulls are loving lap dogs who are small enough to curl into a ball, yet big enough to take for hikes. Plus, Pit Bulls are in every shelter across the country, meaning a man could really demonstrate his heart by rescuing his next dog from that kind of life.

Are you a manly man with a dog not on this list? Don’t fret. In reality, any dog fits the manly man’s needs, which is why they’re our best friends! If you think a different dog should be on this list, let us know why.