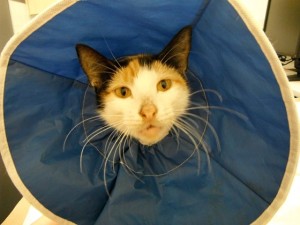 Mama Star has used up several of her nine lives but she keeps fighting and it looks like the worst of her problems may finally be over. Unfortunately for the kind Good Samaritan who took her in from a New York alley and has funded all of her care, the bills have mounted to a sum in excess of $5,000. Donations to help with the cost of Mama Star and her kittens’ bills can be made through a YouCaring.com online fundraiser.

When she was found, Mama Star had two kittens with and was suffering from an extreme case of prolapsed colon, likely incurred during the birth of her kittens. All three were full of fleas and worms and very thin. WaHi Cats, a trap, neuter, release rescue group was contacted and together with the Good Samaritan brought Mama Star and her kittens in. Mama Star needed emergency surgery to correct the prolapse, surgery which given her serious condition was considered risky at best. While the kittens were treated for fleas and parasites, their mother was brought to an emergency clinic where she received surgery.

Against all odds, earning her the name “Mama Star” for her shining devotion to her kittens and desire to survive, Mama Star survived the surgery. She was severely anemic and soon developed a life-threatening case of sepsis on top of everything else. Given everything else she had already been through, her prognosis for surviving the infection was extremely poor. But she blew the odds out of the water again and, after days in ICU and then regular hospital care, Mama Star is finally recovering in a foster home.

Through the entire ordeal, the Good Samaritan has been paying all her medical bills and visiting her on a daily basis. At one point, the only person for whom Mama Star would eat was the Good Samaritan. The two kittens have fully recovered, been spayed/neutered and placed in permanent homes. Their mother still has a ways to go before she will be ready for adoption.

There is now an online campaign to help reimburse the Good Samaritan for the money she laid out caring for Mama Star and ensuring that she received the veterinary care she needed to survive. You can read more about Mama Star’s journey and see some pictures of this miracle cat on the You Caring website. Consider making a donation and celebrating human kindness.