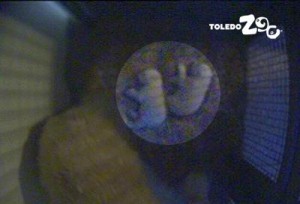 The Toledo Zoo has announced that it’s as yet un-named, twin polar bear cubs will make their public debut this spring, likely in May. The cubs were born November 21st, 2012 to Crystal. This is the fourth litter of cubs born at the zoo since 2006 and Crystal’s third litter. The cubs are currently off-exhibit with their mother. Zoo staff have not yet seen them in person. They are monitored through cameras located in the mother’s den.

Polar bears are found in the northern parts of Canada, Greenland, Alaska, Norway and Russia. More than two thirds of them reside in Canada. They are considered threatened due to habitat loss as a result of climate change. Current estimates of the remaining polar bears in the wild are 20,000 to 25,000. As a result of this, many zoos, including Toledo’s, participate in a Species Survival Program (SSP) run by the Association of Zoos and Aquariums (AZA). Dr. Randi Meyerson, curator of mammals for the Toledo Zoo, is the coordinator for the national polar bear SSP.

The goal of the Species Survival Program is to ensure that the captive polar bear population in zoos maintains its genetic diversity by breeding polar bears and moving the offspring to different zoos around the country and sometimes internationally to contribute to other polar bear breeding programs. Two cubs in a litter are not unusual for polar bears and this is Crystal’s second set of twins. Her first, Aurora and Annana, now reside in Columbus. Another cub, Siku, born to Crystal and Marty in 2009, now resides in Louisville, while Nan and Marty`s son Niki went to Kansas City. The Toledo Zoo has one of the most successful polar bear breeding programs in the United States and also works with conservation group Polar Bears International.

The zoo has several web cams that can be seen online monitoring popular animals such as the elephants, seals, and polar bears. Although none are focused on Crystal and her cubs, it is almost guaranteed that views will spike when the cubs go on display. When the Toronto Zoo, in Ontario, Canada, held a contest to name their newest polar bear cub last year over 40,000 people voted. Now a one year old, named Hudson, he is on his way to his new home in Winnipeg, Canada, as another polar bear Species Survival Program success story.

The Toledo Zoo has not yet named the cubs and does not even know their sexes at this point. The Toronto Zoo had a leg up in the publicity department when Hudson`s mother, Aurora, rejected him shortly after birth. Because he was hand reared by his keepers, the public had constant access to video and photos of him as he grew. It has been suggested that the Toledo Zoo may hold a contest to name their cubs as well.

To stay up to date on the latest news of the polar bears or if a name contest will be held, visit Toledo Zoo’s website.