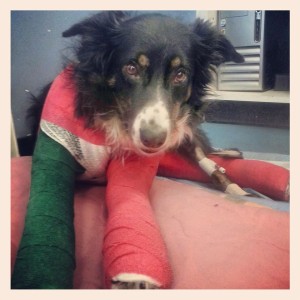 She was bloodied and broken when she was brought into the 24-hour animal hospital located in Manchester, NH, about an hour north of Boston. Her name was Molly, a 3-year-old Australian Collie who had just suffered four broken legs after being hit by a plow. Her owner came to the hospital frantic, wondering what could be done. And although there was a chance that Molly could be saved, there was no way her owner could afford the massive surgeries required.

With little hope left in his voice, the owner asked if he could take Molly home, to die on her own. The vet on duty discussed humane euthanasia, and even had the lethal syringe lying beside Molly, ready for the inevitable.

That is until Dr. Deborah Kelloway came into the room. Kelloway, who runs the Advanced Veterinary Center in Manchester, has a particular desire to keep animals alive if at all possible. She’s made it her mission, to the point that she started an animal rescue shelter – All Better Pets housed inside the hospital – to help rescue dogs from high-kill shelters (and animals who are surrendered) and place them in forever homes.

Kelloway examined Molly, and noted that there seemed to be no internal injuries, and Molly was in relatively good spirits.

“Is there another option for her?” she asked herself. She convinced Molly’s owner to surrender the dog so that All Better Pets could assume responsibility for her. That way, they could try to save her, if they could raise the funds.

I know this because I volunteer at All Better Pets. I help take out the dogs, clean their crates, and I manage their website. And for the past year, our little animal shelter got little notice as it continued to save cats and dogs who were left with little other options in life (including my dog, Lincoln, who was rescued from a high-kill shelter in North Carolina). But since Molly came in, just 8 days before Christmas, countless miracles have happened that didn’t just save one life, but likely countless others.

Molly and her legacy

The night Molly’s owner bid a reluctant goodbye to his dog, the vet tech on duty happened to notice something as the owner drove off – NH veteran license plates. With a mixture of holiday spirit and indebted gratitude for someone who served for our country, Dr. Kelloway and the staff at AVC and All Better Pets decided on a new goal: save Molly and return her to her owner.

But for that, they needed help.

Dr. Kelloway reached out to her close circle of friends, including past volunteers and supporters of the shelter. Her goal was to find “200 people to contribute $20 or 400 people to contribute $10” to pay the expected $4,000 for the surgery costs. Donations came in at a steady rate, and it appeared that it was possible that the money would be raised.

But then a funny thing happened. We hear about viral content all the time. Usually it has something to do with what Miley Cyrus is not wearing, or it involves silly songs and parodies. But in Molly’s case, viral went far deeper. News stations in NH, Boston and beyond quickly picked up this story: Dog hit by plow. Shelter looking to raise funds to save her.

As the shelter’s webmaster, I took a look at the site’s traffic. What once was the occasional “hit” reached up into the thousands. But that’s not the only thing that climbed. A GoFundMe campaign was created and within one day, Molly’s surgery was paid for, as was any costs that would be needed for her rehabilitation. In fact, the initial request was $10,000 (for all current and future costs for Molly and her owner). Within a short few days, donations surpassed $20,000. To date, nearly $45,000 has been raised.

Obviously Molly doesn’t need $45,000, which is why All Better Pets quickly released a statement to say that all future donations would go to save other dogs whose only option appears to be euthanasia. That didn’t matter to donors who continued to donate, often times in memory or honor of their own pets.

It appears that although Molly nor her owner would relive the moment she was plowed down, her tragic accident has created a legacy that will directly impact the lives of countless pets in need.

Four days after being hit by a plow, Molly was in surgery. I watched as hundreds, if not thousands, of people tracked updates on Twitter, Facebook and the shelter’s site. I did my best to keep them updated online, and, some 10+ hours later, Molly was out of surgery and in recovery. A day after her surgery, the shelter posted a video of the dog taking her first steps.  Of course, those steps were just symbolic. Molly has a long road ahead. But thanks to the viral response, a doggie wheelchair was donated, and supporters continue to ask what they can do to help. Many people say the same thing: This was the best holiday story of the year.

Perhaps it was, but even if it wasn’t, it has proven one thing. Crowdsourcing and going viral can do good. When thousands of strangers come together for one simple goal, a life can be saved. And, in the laws of karma, from that one life, dozens more will be saved too.