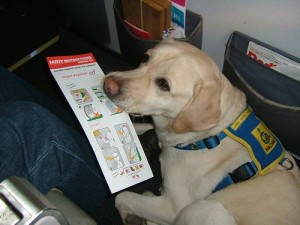 Orlando, FL – Pet Airways is calling all traveling cats, dogs, and other family pets to fly “first class” in safety and comfort to Orlando, Fl this summer, as the airline is expanding!  Orlando will be the airlines tenth city in the United States.  Launched in 2009, Pet Airways is a pet-only airline where your pets travel in the main cabin, not the cargo hold.  The new Orlando facility will feature a new style of pet lounge, and will offer enhanced services, including ground transportation and grooming.

In addition to the overall pampering your pet will receive, the main cabin has been specifically tailored to accommodate their needs, including in-flight pet attendants keeping the climate controlled.  Pet Airways makes it easy for your pets to travel with services including convenient check-in, potty breaks, personal boarding of each pet by a pet-attendant, and constant attention during the entire flight.

Pet Airways ensures that your pets are in the good hands of people who love and know how to take care of pets.  From the moment a pet is dropped off at a Pet Lounge, the pet is always under the care of trained Pet Attendants.  Your pets will fly in planes that are fully-lit and have the proper level of fresh air circulation that pets require.

Traveling with pets can be an inconvenience, no matter how small or large.  Thanks to the owners of Zoe, Jack Russell Terrier, the need for a pet-only airline was discovered.  Owners, Dan and Alysa, said, “You see, on Pet Airways, your pets aren’t packages, they’re Pawsengers.™ And every step of the journey, we’ll take care of them as if they were our own.”

According to Dan Wiesel, President and CEO of Pet Airways, “Currently, most pets traveling by air are transported in the cargo hold and are handled as baggage. The experience is frightening to the pets, and can cause severe emotional and physical harm, even death. This is not what most pet owners want to subject their pets to, but they have had no other choice, until now.”

“Based on unprecedented customer demand,” says Wiesel, “we have decided to accelerate our expansion plans and will be opening operations in Orlando.  Orlando is one of the fastest growing population areas in the U.S. and it is only natural that we provide service to such a large and growing population.  In addition to the size of the population, approximately 50 million visitors come to Orlando each year.”