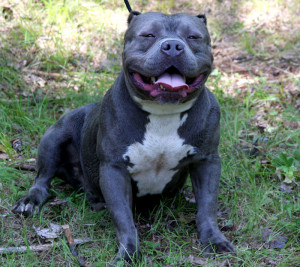 Canadians are known for being kind and accepting people, but it seems they don’t extend this civility to dogs.

Ontario has a province-wide ban on pit bulls and dogs who fall within the lineage of the pit bull, which is why newly acquired Toronto Blue Jay pitcher Mark Buehrle suddenly finds himself separated from his family. Buehrle owns four dogs, one of which (Slater) is a bulldog and American Staffordshire Terrier mix (the latter being of the pit bull lineage).

When Buehrle was traded from the Florida Marlins to Toronto, the family had a decision to make – either live in the states (like Buffalo) and commute to Toronto, or leave Slater with friends. Instead, Buehrle’s wife and two children will live away from him during the baseball season, so that they can care for Slater.

In 2008 an appeal challenging the ban was denied, and the Ontario Court of Appeals upheld the ban, stating “the total ban on pit bulls is not arbitrary or grossly disproportionate in light of the evidence that pit bulls have a tendency to be unpredictable and that even apparently docile pit bulls may attack without warning or provocation.”

Being labeled as a pit bull in Ontario is just as good as having a death sentence. Dogs that have even a hint of pit bull in them have the potential of being euthanized or exiled, which is why many volunteers have stepped up to save these dogs. Volunteers will take “pirate puppies” to neighboring provinces such as Nova Scotia, so that the pit bulls can be adopted.

“They were just born and of a certain color with little short ears and possibly their mom was more bull-and-terrier than boxer,” said Emily Ugarenko, co-founder of Ador-a-bull, to the thestar.com.

Pit bulls who do not appear to be a threat to public safety can legally be sent out of Ontario. But if a pit bull is deemed dangerous, it’s illegal to ship the dog out. Instead, that dog will likely face euthanasia.

Pit bull bans are not uncommon. Vancouver had a ban until 2005. Netherlands had a 15-year ban that ended in 2009. Boston had a pit bull ordinance in 2004 which fizzled from controversy and lack of organization.

It seems all too common to hear in the news of a pit bull attack. Is that because pit bulls are more vicious? Or does the media cling to pit bull attacks over, say, a french poodle attack? Either way, while there are arguments for and against these bans, it’s important not to forget that for every pit bull (or any dog) who is prone to bite, there are likely hundreds who are prone to lick.