Home News The Iditarod: A Brief History, Fun Facts, and the 2013 Winner! 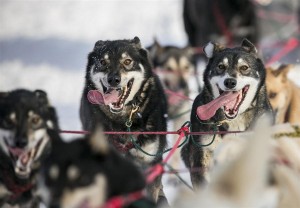 It’s that time of year again. One of the most gruelling races on Earth has begun. Over a thousand miles of Alaskan trail stretching from Anchorage to Nome, all of it to be covered by a musher and his dog team. Yes, it’s Iditarod time!

The Iditarod began its current route in 1973. Sled dogs, mushers, and traditional trails used were disappearing as the snowmobile altered transport in the north forever. Joe Redington Sr., Tom Johnson, and Gleo Hyuck along with a team of volunteers ran the first ever Iditarod. It was meant to reconstruct the freight route that ran from Anchorage to Nome. The winner that year was Dick Wilmarth. It took him three weeks to complete the race. Joe Redington Sr. would never win his race but he competed nineteen times, the last time in 1997 at the age of eighty, two years before he died of cancer. He came in 5th four times.

The Iditarod has run every year since 1973.  Modern racers often finish it in ten days now. The fastest finish ever was in 2011 when John Baker finished the race in 8 days, 18 hours, 46 minutes and 39 seconds. The trail alternates between running north to south in odd years and vice versa in even years. Dogs can be dropped at checkpoints along the route if they are ill or not feeling 100%. Dropped dogs are flown to the site of the end of the race where they will be cared for by volunteers until their musher arrives to pick them up.

There are over 50 specially trained veterinarians involved in the race. They check every dog at each checkpoint of the race to ensure it is healthy and capable of continuing the race. Sled dogs that compete in these types of races are the ultimate canine athletes. They cover huge distances each day, while pulling a sled filled with supplies and the musher. Musher and dogs will have to camp out periodically along the trail and they need to carry all their supplies with them for the entire race with the exception of a few things that can be dropped at checkpoints. There are mandatory layovers of 8 and 12 hours that each musher must take over the course of the race. Most amazing is that they absolutely love it. If you have never been behind a team of sled dogs, you cannot imagine how much they love to run.

It is a test of endurance and the deep bond between musher and dogs. The weather can be brutal with temperatures as low as 0 F, icy winds, and sudden storms. Visibility at times can be very poor and the traditional role of sled dogs in determining the safest route comes into play when the musher cannot see where they are going and becomes confused. In the end both parties must trust one another completely to reach the end of the race.

Over sixty teams started this year’s race. Many consider it a huge achievement just to finish it. The mushers come in all ages, men and women alike. The dogs are often Alaskan Huskies, bred to run for generations. While the Iditarod is not for most of us, consider getting behind a dog sled for some winter fun of your own while we wait to see who wins the 2013 Iditarod.

UPDATE: As of the time of publication, Mitch Seavey has won the 2013 Iditarod, crossing the finish line at Nome in nine days, seven hours, 39 minutes and 56 seconds. Congratulations to him and his lead dog Tanner, a 6 year old orange-brown husky. Seavey is the oldest winner ever, at 53 years old, and also won the Iditarod in 2004.