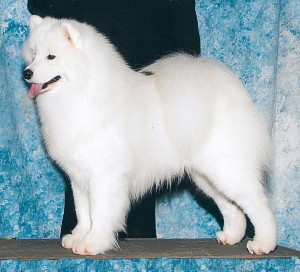 Laurien Berenson has been writing murder mysteries set at dog shows for years but now North America’s most famous show may have a murder mystery of their own. Cruz, a three year old purebred Samoyed, became ill and died just four days after competing at the Westminster Kennel Club show in New York City. Cruz’s co-owner, Lynette Blue, and his handler, Robert Chaffin, believe that foul play may be the cause of their beloved companion’s death.

Cruz, also known as Am GCh Polar Mist Cruz’N T’Party At Zamosky, left New York for shows in Colorado after the Westminster show. He became ill and began vomiting blood and died of internal bleeding a short time later. It was initially believed that he had gotten into rat poison at the hotel they had stayed at in New York and so he was cremated without a necropsy (animal autopsy).

Rat poison, also known as warfarin, kills by cause uncontrolled hemorrhaging upon ingestion. Dog death due to ingesting this toxin happen many times each year. It is quite potent and is fatal in small doses. If caught early enough it can sometimes be treated but symptoms are minimal and it often goes undetected until it is too late. The hotel where Cruz and family were staying has since confirmed that they do not use warfarin in their hotel.

Chaffin and Blue insist that the only time Cruz was alone during the show was when he was benched at the Westminster Kennel Club show. Westminster is one of the few remaining benched shows in the United States. Benched shows require that all entries arrive by a certain time of day and remain at their “bench” until the end of the regular judging. The bench is a small area on a platform provided for each dog. In general, it is only large enough for a crate and stashing a bag of supplies. The benching area is open to the public. This gives the public ample time to wander and see a variety of dogs during the show.

Westminster has never had something like this happen before and, because there wasn’t a necropsy there is no way of confirming that a poisoning occurred at this show. Animal rights activists and dog show attendees have a long history of dislike of one another. Rumours of incidents where dogs have been poisoned in the past or released from their kennels when there is no one to safely capture them (and prevent them from running into traffic and other hazards) have been around for years. However, there is no proof that animal rights activists were involved in Cruz’s demise. PETA categorically denies any involvement.  While it is well known that PETA opposes breeding dogs and the keeping of pets of any type, the only confirmed activities they have engaged in with respect to Westminster is a protest that occurred a few years back.

Dogs do tend to eat a wide variety of noxious substances and it is not impossible that Cruz ate something which led to his death. It is also possible that he was poisoned. Unfortunately, without a necropsy, the reason Cruz died will never be known.