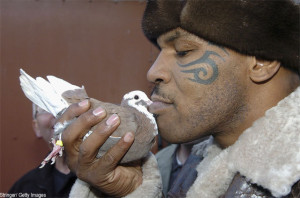 Mike Tyson has eaten ear before (at the expense of Evander Holyfield) but at least he’s never eat pigeon. His ex-girlfriend, on the other hand, is a different story.

Tyson’s love affair with pigeons is nothing new (in fact, he’s admitted that his first ever fight was as a child, when he fought a “bigger” kid who had pulled the head off of one of Tyson’s beloved birds. In 2011 he had a pigeon racing reality show. And Adult Swim just announced that Tyson will team up with a sidekick pigeon in a new cartoon series.

So it shouldn’t have been a surprise to his ex-girlfriend that Tyson surrounds himself with pigeons. “They’re so much like people,” Tyson once said.

But in a recent interview with CBS New York’s WFAN, Tyson admitted that one of his ex-girlfriends became incensed with this pigeon obsession.

“I don’t know why you’re flying those damn birds,” he remembers her yelling. “You should be eating them.”

As though to demonstrate what she meant, she proceeded to cook, and eat one of his pigeons.

“That’s why she’s not my woman anymore,” he told the “Boomer & Carton” show.

Tyson’s pigeons are kept in New Jersey, and tended to by Vinnie Torre, a trainer and racer. Nowadays Tyson’s mighty picky when it comes to pigeons. He’s not interested in the riff-raff found on Brooklyn streets, ironically the same birds that drew him toward this obsession. Nowadays he’s looking for “the best bloodline …dominant personalities I want to breed.”

Although Tyson has been a pigeon lover since childhood, he only began racing pigeon as part of the Animal Planet show “Taking on Tyson.”

Pigeon racing is a whole lot popular than people realize. Racing a pigeon means releasing pigeons in the air (from a pre-determined location) and timing how long it takes for them to come “home.” Before you decide this sounds like your cup of tea, you should realize that the pigeons that are decorating your patio with their, well, talents, aren’t suited for the racing circuit. This sport requires “Racing Homers.” These birds are trained to be able to find their way home, even at distances upwards of 1,000 km.

You might see pigeons as wild birds, or rats with wings as many city-dwellers proclaim. But they’re actually the oldest domesticated bird. Early domesticated pigeons were used to carry messages. In fact, some Pigeon Posts still exist today, although primarily for military purposes. Pigeon racing began in Belgium in the 1800s.

Of course, whenever there are animals involved, PETA will speak up. In 2012, PETA disclosed their evidence from a 15-month investigation, that showed that only 40% of pigeons, on average, make it home from a race. Injuries, getting lost, and falling victim to birds of prey are all responsible for the high-rate of a bird’s failure to return. And believe it or not, PETA claims they have evidence that some racers use performance-enhancing drugs on their pigeons.

Pigeon racing is fairly popular in the US. Florida and Coney Island are popular areas for formal racing. The sport is banned in Chicago, however. Many organizations (like Kiwanis Club) use pigeon racing as a fundraising event.

For anyone considering messing with Mike Tyson’s pigeons, consider this. Not only did he dump his then-ex-girlfriend for her culinary surprise; but as a child he went even further:

“One morning I woke up and found my favorite pigeon, Julius, had died. I was devastated and was going to use his crate as my stickball bat to honor him. I left the crate on my stoop and went in to get something. I returned to see the sanitation man put the crate into the crusher. I rushed him and caught him flush on the temple with a gigantic right hand. He was out cold, convulsing on the floor like an infantile retard.”

Thanks for sharing, Mike.

Oh, and for anyone who’s ever eating squab at a restaurant … surprise! You’ve eaten pigeon.