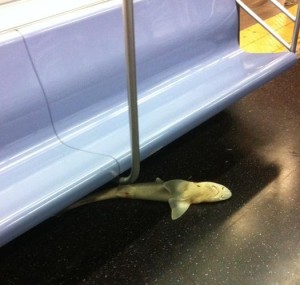 Earlier this month, N-train riders saw a strange sight on their daily commute. Of course seeing strange sights on any NYC train isn’t all that newsworthy, except when it involves a shark.

The shark, a 1.5-foot-long sand shark was riding beneath one of the seats. But commuters only had a bad smell to worry about – the shark was dead. Even if it were alive, sand sharks aren’t like their Jaws cousins. They have no teeth and are completely harmless.

The shark instance brings to mind the fabled NYC stories of sewer alligators, which have pretty much amounted to nothing more than urban legend.

But strange animals are no stranger to the Big Apple. While many people equate city living to rats and pigeons, these animals have a different idea.

1. Bottlenose Dolphin – Sticking with the marine theme here, a bottlenose dolphin once washed up in the Gowanus Canal. The 7-foot dolphin likely didn’t intend to funnel his way into the canal – that stretch of water has long been known to house some pretty gross contents. Despite his surroundings, the dolphin didn’t die as a result of pollution, but from a damaged kidney, parasites, and stomach ulcers.

2. Parakeets – It’s one thing to own a parakeet for a pet. 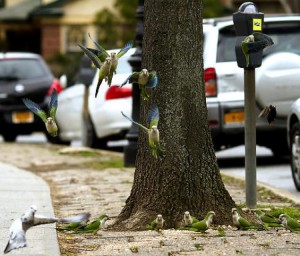 It’s another thing to find these birds down south, like in Argentina, where they’re from. But to actually have monk parakeets (who live in colonies of up to 60 birds) fly around the skyways of Brooklyn? Well, that’s a bit odd. The arrival of these tropical birds can be traced back to the 1960s, when a crate with parrots at Kennedy Airport broke apart.

3. Coyotes – Anyone who doesn’t live in NYC might not find a coyote sighting to be odd, but seeing that these animals are pack animals, we wonder why they decided to expand their reach to one of the most densely packed places on the planet? Theory has it that they traveled through the Adirondacks to the city to get late-night Chinese … or just to increase their range.

4. The Brooklyn Monster – We wish we could tell you what this animal is, but the jury’s still out. 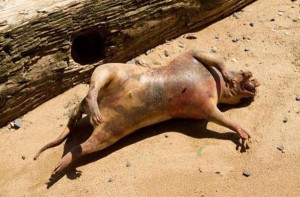 Some say it’s a relative of the famed Montauk Monster (also of unknown species). Regardless, last summer, an unidentified animal turned up under the Brooklyn Bridge.  Anything that’s unidentified, well, it begins to grow a life of its own. Perhaps it is some monster, but likely not. A Cornell University professor suggests it was a small dog that became bloated and whose hair had fallen off.

5. Leopard Frogs – NYC is home to a lot of new things, including styles, foods, and designs. But species? Believe it. Last year, biologists discovered a new species of leopard frogs in the city. While their range is vast, the center of it is Yankee Stadium.