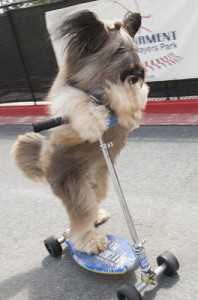 Norman is a dog of multiple talents. The Briard, a French sheepdog, is also now a Guinness Book of World Records holder for the fastest scooter-riding dog. He set the record easily on July 12th in Marietta, Georgia. Norman rode his scooter 30 meters in 20.75 seconds. The time to beat was 30 seconds. He did it at a fundraiser for the Road Trip Home rescue group which assists in moving dogs from high kill shelters to no kill shelters in the United States and Canada.

This is not Norman’s first time in the spotlight. He also rides skateboards and a bicycle and has been known to surf. He was surfing on a Rose Bowl Parade float in a wave pool in the 2012 parade. He has toured both the United States and Canada and also appeared on various television shows including the David Letterman Show. Along with Tillman, the skateboarding Bulldog, Norman starred in the Animal Planet series Who Let The Dog’s Out. Together, they visited various cities looking for talented dogs while showing off their own skills as well.

To ride a scooter, Norman places his front paws on the steering handles, one rear paw on the base and pushes himself forward with the other foot. The bicycle was a bit harder to learn. It took him about two years to get the hang of it but he has got it down pretty well now. He can get on the bicycle by himself but his owner and trainer, Karen Cobb, helps place his rear paws on the pedals to avoid injuries.

The scooter record was set just a few days before Norman’s fourth birthday. He has his American Kennel Club Companion Dog (CD) obedience title and is also trained for agility and herding title work. As an adult Briard, Norman weighs about 70 lbs and is 26” tall at the shoulder. The Briard is a French herding breed that is popular across Europe and North America. Many will recognize them as the breed used as a model for Sam Sheepdog in the Looney Tunes cartoons. As with most herding breeds, he has a great work ethic and loves to have a job to do. Cobb continues to expand his repertoire of tricks and skills and would like to see him do more television and film work in the future.  In the meantime, fans can catch him on the Hallmark Channel in Who Let the Dog’s Out.