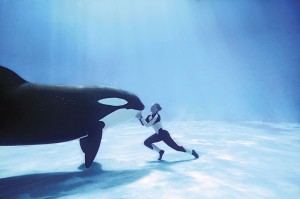 SeaWorld has gone head to head with Blackfish documentary that claims that the theme park’s policy of keeping killer whales in captivity lead to the deaths of three people.

The critically acclaimed documentary, Blackfish, which first screened at Sundance in January, was just released in US cinemas. The film focuses on Tilikum, an orca that, the film claims, has been responsible for three deaths since its captivity in 1983. These deaths include the well publicized death of SeaWorld trainer Dawn Brancheau in 2010.

As director Gabriela Cowperthwaite told ABC News’ Nightline – “There is no documented case of a killer whale ever killing anybody in the wild. It’s only in captivity where these incidents have happened.”

SeaWorld released an official statement in response to the film that reads: “Blackfish is billed as a documentary, but instead of a fair and balanced treatment of a complex subject, the film is inaccurate and misleading and, regrettably, exploits a tragedy that remains a source of deep pain for Dawn Brancheau’s family, friends, and colleagues.”

Brancheau was killed after she either slipped or fell into a whale tank and was mauled. SeaWorld went on to state that “SeaWorld is one of the world’s most respected zoological institutions.”

Blackfish doesn’t just claim that captive whales are dangerous, but they claim that SeaWorld likely purposely deceived the public about what really happened with Brancheau (SeaWorld stated that Brancheau made mistakes when she was killed by Tilikum, such as getting too close to the whale so that he could pull at her ponytail).

Cowperthwaite, who in fact is a mother who has taken her kids to SeaWorld, isn’t backing down from her claims. She begun Blackfish as a film, but when she discovered potential coverups made by SeaWorld, she felt like “I have this information and I have a responsibility not to put this film out.”

The documentary is far from a G-rated Free Willy film, It involves interviews with marine biologists and other scientists, however, it also features graphic footage captured, such as footage of an orca grabbing a trainer’s foot, dragging him to the bottom of the pool for an extended period, resurfacing, and repeating the horrifying ordeal several times.

SeaWorld continues to claim the documentary is far from fair, while Cowperthwaite argues otherwise. Perhaps it’s up to you to decide?