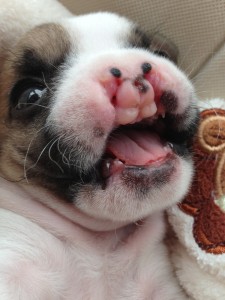 Meet Lentil, more often called Lenny, the French Bulldog puppy that has reached into the hearts of dog lovers across the internet. He’s only eleven weeks old and he already has thousands of fans and supporters. Born with a severe cleft palate on February 2, Lentil and his sister Edamame were turned over to the French Bulldog Rescue Network (FBRN) shortly after being born in the hopes that they could manage the special care he would require. Edamame passed away within twenty-four hours leaving Lentil the only survivor in his litter.

Cleft palates are a congenital disorder where the two sides of the palate (roof of the mouth) do not fuse together. These means there is an open space connecting the mouth to the nasal passages. Any attempts to eat normally or nurse on his mother would result in Lentil aspirating the milk or food into his lungs, putting him at high risk for aspiration pneumonia.

Exposure to teratogenic chemicals during pregnancy can sometimes lead to puppies born with cleft palates and other birth defects. These chemicals interfere with embryonic development. Cleft palates may also be inherited but the genetics behind them remains unknown at this time. They do occur more frequently in some breeds such as beagles, bulldogs, French bulldogs, cocker spaniels, Labrador retrievers, and dachshunds.

Many puppies born with cleft palates do not survive long enough for surgery. It is very easy for fluids to be inhaled into the lungs. For those that do survive, corrective surgery can be done once they are old enough. In Lentil’s case, he is being fostered by Lindsay Condefer until veterinary surgeons at the University of Pennsylvania can perform the surgery. She feeds him using a tube that goes down into his stomach, preventing any food from ending up in his lungs.

As you can imagine, surgery of this nature is expensive and difficult to do. Lentil and the FBRN have been raising funds to cover the costs. As of April 13, 2013 enough money had been raised to cover all of his expenses. Any further money raised will be used to assist other rescued dogs. Lentil has a consultation scheduled at the end of April and it is hoped is that he will be able to have surgery in May or June.

Lentil’s rescue group has also begun working with Children’s Craniofacial Association (CCAKids), a group that advocates for children born with similar birth defects, including cleft palates and other facial anomalies and disorders. CCAKids, FBRN and Street Tails Animal Rescue (STAR) will be working together on a fundraising event in early May in Philadephia to raise funds for all three groups. It is hoped that Lentil can become an Ambassadog for cleft palates in both kids and dogs.