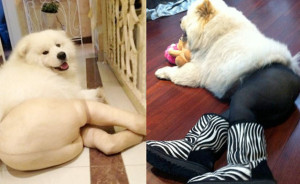 In China, a trend has taken the internet by storm. Dogs in tights – otherwise known as Gou Gou Chuan Siwa. A google image search for “dogs in pantyhose” returns hundreds of disturbing pictures of dogs all dressed up in pantyhose and high heels. What kind of dogs? Dog breeds include Huskies, German Shepherds, Pugs, and even Boxers. Is this an amusing pastime at work or something a bit more disturbing?

The trend started on a Chinese social network site called Weibo. The first picture uploaded featured two poodles in sheer black tights. The dogs picture received 160,000 comments in just three days. Within the week, several news stationss and online journals picked up the story. The stations compare Dog Wearing Pantyhose to other pet fads, including pet shaming (where a picture is taken of a pet with a shameful behavior written on a piece of paper, ex: I ate my own barf), cat breading (where pictures of cats with bread around their necks), and bee dogs (you guessed it pictures of dogs dressed like bees).

What has the popularity been? Let’s take a look. According to Google Trends the search term “dogs in pantyhose” reach the highest level of interest on April 9th when the majority of news stories in the US hit the stands. The term “dogs in tights”, however, continues to grow in popularity.

What does this mean for the U.S.? Are you appalled by the lack of respect and dignity the images show our pets? Or are you secretly amused and plan on googling search terms for the rest of the day? A Facebook page has started, but only a small 71 people seem to be interested. Instagram has a similar story of just 155 photos, most of which are repeated over and over, search #dogsintights and #dogsinpantyhose. Twitter is also ablaze with comments on the trend most of them find the trend entertaining and amusing.

This trend, although obnoxious and somewhat crude, isn’t really that different than the pet owners who dress up their pets in store bought clothes. Imagine seeing a Bichon Frisé in a pink polka dot bikini while her brother wears a football jersey. It’s been done. How far does it go? Are doggie sweaters and skirts, even bathing suits ok in comparison with this trend?

It’s safe to say, this trend, although amusing (or revolting) to Americans, has not caught on. Most pet owners will be relieved and continue to shame our pets in other ways, whether we choose matching sweaters on Christmas, or announcing their bad behavior on the internet.