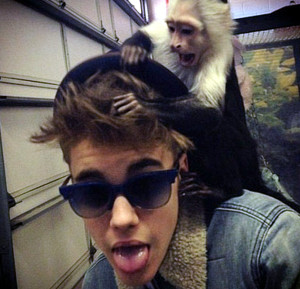 Did you hear the one about Justin Bieber and his monkey? No, it’s not a joke waiting for its punchline. The Biebs does in fact have a pet monkey that he’s quite fond of, which was made evident recently when the monkey was seized from him in Germany. Bieber didn’t have the necessary paperwork with him to allow him to bring the capuchin monkey into the country, so Mally (the monkey) had to stay in quarantine. Biebs did finally get his friend back.

But Bieber isn’t the only celebrity who leans toward the life-exotic. Other stars seem drawn to the type of animal that you won’t find at your local pet store. Here are some other celebrities and their strange pets.

Kangaroos and the Ice Man: You may argue that Vanilla Ice (Robert Van Winkle) isn’t a star … anymore … but did you know this once-famous rapper owned a kangaroo named Bucky Buckaroo? Bucky (and Ice’s goat Pancho) actually escaped from Ice’s home, together, back in 2004, but was reunited with him after several days painting the South Florida streets red. 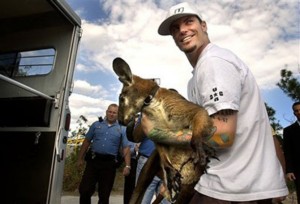 Men are such pigs: Or, a man can have such pigs. George Clooney (now we’re talking star power) once had a pot-bellied pig, named Max. Max died in 2006, marking the end of a beautiful 18-year relationship, Clooney’s most intimate one to date.

A tiger knockout: You’ve seen the “Hangover” right? Mike Tyson really did own a few tigers in his time, but had to hand them over to authorities when they got too big and dangerous for him. Why didn’t he just bite their ears off?

Uhh … team Jacob: Man, Kristen Stewart is all over the map: dates her on-screen boyfriend, Edward/Robert Pattinson; She cheats on Robert; She makes up with Robert … and so on. But does the fact that she owns a wolf-dog hybrid suggest she’s been on Team Jacob all along? Hmm … 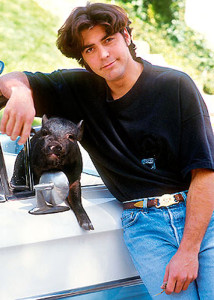 It’s Hee-Haw time: Reese Witherspoon has made a career out of being a southern belle, and Honky and Tonky are no exceptions. Who are  Honkey and Tonky, you wonder? Well, they’re Reese’s pet donkeys. These two little fellas aren’t the talk of the town, however. They’re hee-hawing has been the source of a few complaint letters sent by Reese’s neighbors.

I can play an octopus: Nicolas Cage isn’t known for being “all there.” He’s a bit, well, actor-y (see Daniel Day-Lewis for more information). So why did this not-all-there actor drop $150,000 for an octopus? He wanted the opportunity to study another life form to become a better actor.

Put that on your résumé, Clooney!

Newsflash! Posh Spice says size doesn’t matter: Ah, poor Clooney, we don’t meat to keep harping on you, but maybe David and Victoria Beckham have one up on you. Sure, you had yourself a pot-bellied pig, but the Beckhams have miniature (or teacup) pigs. The little buggers were “created” in the 80s for medical research. Now that’s an oxymoron, huh? Miniature … and pig?