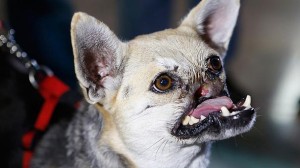 Kabang is a shepherd mix whose name means “different colours” in the local dialect of her home in Zamboanga, in the southern part of the Philippines. Almost a year and a half ago, she selflessly leapt into the path of a motorcycle that was headed towards two young girls. Her teeth became embedded in the front wheel and her upper jaw and muzzle were torn off when the motorcycle flipped. She likely saved the lives of her owner’s daughter and a cousin.

This act of heroism attracted attention across the country and then around the world. Dog lovers came together and raised over $27,000 for Kabang to travel to the US for corrective surgery as vets in her native country were unable to help her. The treatment took over eight months but Kabang is finally home again.

Veterinarians at the University of California, Davis, school of veterinary medicine were able to close her facial wound although they could not reconstruct her nose. Kabang received multiple skin grafts from her cheeks, neck and forehead to cover the exposed sensitive areas of her face. She was also treated for a cancerous tumour and heartworm infection over the eight months.

Kabang was given the royal treatment upon her return to the Philippines. She has been named a “dog ambassador of good will” and was greeted at the Manila airport by fans and television crews. “What we want is to make her an ambassador of dog good will, and to promote responsible pet ownership,” said Anton Lim. He was the veterinarian who accompanied Kabang to the University of California in Davis for her surgery.

She toured a local shopping mall and a park where dog lovers often take their pets. She greeted people and cameras with a wagging tail and seemed no worse for her experience. Kabang is only two years old but she has already made an important contribution to society in the eyes of her owner Rudy Bunggal and many others. Kabang and Rudy were taken to the town hall in the back of a pickup truck decorated with yellow balloons. There the town mayor bestowed the title of “Pride of Zamboanga” on Kabang. A few days later she was also given a short motorcade to celebrate her return home.

There have been many canine heroes over the years that have saved the lives of their owners and even complete strangers at the risk of their own lives. Kabang has joined the ranks of the canine elite and managed to survive the experience due to the kindness of strangers and friends of her family. What more could anyone ask of man’s best friend?