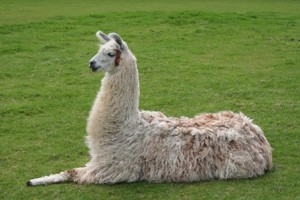 30,000 people in the United States own Llamas. Two of them are living in New York with 55 llamas. ABC news interviewed this couple who is quoted as saying, “They’re like potato chips. You can’t just have one.” According to the International Llama registry, there are over 167,000 registered llamas living in the United States. What’s behind the llama craze? Do they really make great pets? For families looking to jump outside of the pet box but are looking for a same and loveable pet, a llama might be the answer.

According to PetAssure.com, “Llamas are first and foremost pets and companions. They are ideally suited to this task because of their predictable low-key temperament, intelligence and ease of maintenance. Llamas are becoming increasingly popular pets due to their mild manners, cleanliness and friendly dispositions.” Llamas are also a pet with a very low carbon footprint. This large animal costs about as much as a dog to keep. They eat grass and drink very little water. The grass can be from your front yard or hay from a nearby farm. The waste they produce is a great fertilizer, so in essence they are growing their own food.

Keep in mind, these are large animals and can easily overpower a human. Overhanding, bottle feeding, and too much physical contact may produce aggressive llamas once adulthood is reached. The llamas will bond with humans and therefore treat them like other llamas. Bouts of spitting, kicking and neck wrestling can occur but can be avoided with the correct rearing.

As the New Yorkers mentioned, you can’t have just one llama. Llamas are very social animals and do best in human families when they live with at least one other llama. These animals are large when fully grown, weighing 250 to 300 pounds at full maturity. Females will reach this weight after two years and males at three.

Before hopping jumping into the llama loving craze, consider the following:

ABOUT US
All Pet News is the leading source for the latest pet and animal-related news.
Contact us: allpetne[email protected]
FOLLOW US
© 2020 All Pet News.