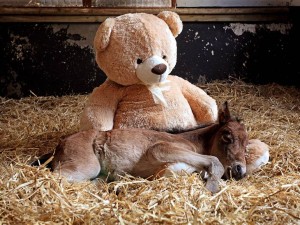 Devon, England’s Mare and Foal Sanctuary has a new resident. Found a few hours after his birth trying to nurse from other mares, Breeze seemed to be orphaned foal. Unable to locate his mother, a farmer called in the sanctuary and they came for the foal that was already beginning to show signs of shock and dehydration.

All animals receive a substance called colostrums from their mother’s within the first twenty-four hours after birth. It imparts antibodies that help protect the baby from infection until its own immune system begins to function properly. Animals that do not receive colostrums from their mother need to be given an artificial substitute or they become prone to life-threatening infections. Breeze had not had the benefit of colostrums or much in the way of nutrition and was in poor shape.

He was immediately put on intravenous drips to make sure he received colostrums drips, medication, and milk to help his recovery along. Although he received round-the-clock care, his first few days were touch-and-go. Now, the Dartmoor pony foal is much improved and in need of company. So, the sanctuary put out a public request for some giant sized stuffed animals to help provide him with something to cuddle up to since he has no mother.

This is a technique the sanctuary has used in the past but their most recent donations were already in use with another orphaned foal that had arrived in April. Luckily, they received many stuffed toys and Breeze has become particularly attached to Buttons, a giant bear. There were enough donated that there are some extras for future orphans as well.

The sanctuary takes in unwanted, abandoned, and orphaned horses including many Dartmoor ponies. Most are rehabilitated and eventually placed in new homes. Others become permanent residents of the sanctuary. The Mare and Foal Sanctuary is a registered charity and they fundraise through a variety of events and stores.

For Breeze, the arrival of sanctuary staff came not a moment too soon. Now, he spends his days in the company of his caregivers, Buttons, and two stuffed dogs which has also taken a liking too. He is now strong enough to venture outdoors for short periods of time. Dartmoor ponies are an ancient, hardy breed meant to survive the tough conditions found at Dartmoor National Park. He’s become a hit on YouTube, gathering almost 400,000 hits in just over a week. Hopefully, this is just the beginning of a new life for this young foal.