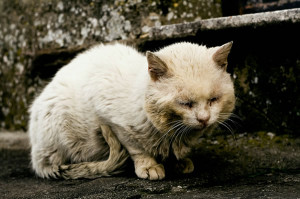 Animal abuse happens quietly. Dogs, cats, horses, and more are tortured,neglected and physically harmed by their owners each day. The commercials of the ASPCA are heart wrenching and visually hard to watch. Learn the signs of animal abuse and take action to report it.

According to the ASPCA, the following are signs of animal abuse:

The United States does not have jurisdiction to try and convict animal abusers. Each state has their own laws regarding the penalties for causing harm to animals. Most states and counties have their own animal control units that can be contacted. A call to the local police department can also be made when abuse is seen. If traveling and local department numbers are not available, dial 911 to be connected to an agent quickly.

When contacting the correct officials, make sure you are taken seriously and offer to help in any way to help resolve the issue. Animal control units only remove animals from homes when it is necessary, they will not remove them if they find the report was false or unjustified. When giving a statement provide as much information to the law enforcement as possible. Include dates, times, sounds, and descriptions of the people involved. Pictures of the location and any acts that you might have captured are also helpful. If others in your area are also willing, give their contact information as well. The more proof and back up the agencies have, the easier it is to save the animals from further suffering.

Follow up with your contact at the agency. If nothing has been done and the abuse continues, keep trying – an animal’s life depends on you.

In New York, the ASPCA Humane Law Enforcement department, finds most of their abuse cases through concerned neighbors and phone calls from the public. Animals have no way to protect themselves and speak up, without our help they remain mute and helpless. If an animals or owners’ behavior is odd, be vigilant to watch for the animals well being and contact the authorities.