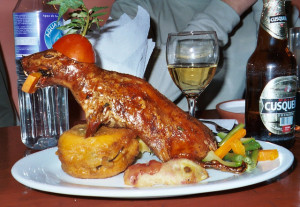 Forget snake and alligator, some Americans are embracing a new exotic meat – Guinea Pig. The animal meat is popular in South American countries, such as Columbia and Peru, where it’s known as cuy. Recent interest in TV shows and blogs of exotic foods are fueling US foodies to try something new. Guinea Pig is not a locally produced meat. They are imported frozen, whole, and hairless from Peru.  NPR reports, that Peru guinea pig imports for a Connecticut company have almost doubled in the past four years – from 600 guinea pigs per year to more than 1,000 today. The imports are not tracked by the USDA or any federal regulatory agencies.

When served, guinea pig is eaten from head to toe. The two pound meal is prepared either roasted or fried. South American restaurants in the US are serving up this meat as the interest in exotic delicacies arise from middle-class foodies. The dark gamey meat is described as tasting rich, oily, and not unlike rabbit. In addition to finding adventure on a plate, there are environmental factors are at play for some pro-guinea pig meat supporters.

There is a push from overseas conservation groups, encouraging farmers in other countries, like Columbia, to find new protein sources with a small carbon footprint. The small two pound animal has high sources of protein with very low environmental impact, unlike Americans main choices of beef and chicken. Matt Miller, a US science writer for the Nature Conservatory, claims where it takes eight pounds of hay to make one pound of beef, it only takes four pounds of hay to make a pound of guinea pig.

Roasted or fried guinea pig is a traditional meal in South America, it was only a matter of time before the exotic meal hit other parts of the world like the US and England. BBC food blogger, Paula Dear, recently put her own stomach to the test. She encountered not only a new meat but also an internal struggle when faced with a plate of guinea pig. A guinea pig once graced the home of Paula Dear as a child and  fond memories of her fluffy pet surfaced as she chose her meal. Her partner in adventure loved each  bite, which included the head, and proclaimed the guinea pig as tasty.

The question remains, with environmental factors aside – could you eat an animal that resembles a pet from your childhood?