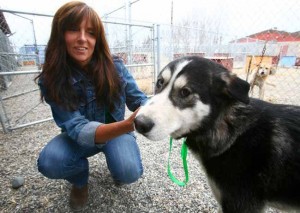 Fairbanks, AK – One of the strangest break-ins in Alaskan history has hit the news Wednesday morning.  The perpetrator?  A large black, tan and white husky mix, caught on surveillance tapes as the culprit in this bizarre story.  Apparently, the husky just had to get inside of the Fairbanks North Star Borough Animal Control Shelter, and he did so by actually digging his way in.  Shelter workers discovered the break-in upon arriving at 7:30am, preparing for a start of new work day.  The shelter staff quickly chose a name for the dog, calling him Albert, but a more appropriate name would have been “digger”.

The beginning of the break-in started around 1:00am, where surveillance tapes caught “Albert” sniffing around the building and the perimeter of the fenced-in dog yard at Peger and Davis roads.  He would occasionally walk out to Peger road, perhaps looking for a ride to freedom, but instead came back to the animal shelter.  He can be seen on the tapes looking into the windows of the shelter, as if he was casing the place.

“He was trying to get in the legal way,”  joked Sandy Besser, the Fairbanks North Star Borough animal control manager.  By 6:30 a.m., Albert decided he wasn’t going to be able to get in the traditional way, so he started digging a hole under the high dog yard wire fence.  Once Albert was able to get into the inner area, he then dug under another fence where he happened upon more than six sled dogs.  “The dogs were excited,” Besser said, “but Albert just went on sniffing around and saying hello to everyone.”

The staff was very welcoming of the perpetrator, not only giving him his name, but joking around about the possible reasons he may have broken in.  Sandy Klimaschesky, the shelter operations supervisor said, “He probably heard about what good care animals get here!”

Now that Albert had successfully made his way into the animal shelter, he is being taken good care of and is looking for a new home.  He weighs 75 pounds, has a longer than average body, one brown and one slightly bluish white eye, and a high arching tail ending in a white tip.  Albert is being described as a laid-back gentleman who is in good health.  He does not have a microchip implanted, and is not neutered.  Albert is estimated to be about two years old.

If you are interested in possibly adopting Albert, the Fairbanks North Star Borough Animal Shelter is open from 11 a.m. to 6 p.m., Monday through Friday, and from noon to 5 p.m. on Saturday and is located at 2408 Davis Road, Fairbanks.