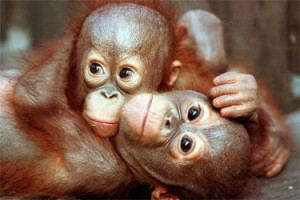 He was burned alive for doing what any living species does every day: fight to survive.

The image of a burned orangutan has become the face of a movement to stop the deforestation of rainforests that are home to one of the most endangered species on the planet – the orangutan.

Some estimates suggest that up to 50 orangutans a week succumb to the loss of their land, and the destruction seems likely to increase.

Over the past two decades, half of Indonesia’s rainforest has been destroyed, according to Rainforest Action Network (RAN), and the Indonesian government plans to convert an area of land (the size of Missouri) into palm plantations within the next ten years.

These palm plantations are what resulted in this one orangutan to be burned alive.

In West Borneo, the rainforest is being burned down to make way for plantations. The orangutan, whose burned body has sparked controversy, grew hungry and begin to search for food. Not finding any of the typical foods he’d have access to in his natural habitat, the orangutan began to feed on the fruit of the palm trees.

Villagers, in an effort to smoke the orangutan out of the tree, accidentally set the entire tree, and orangutan on fire. The orangutan fell from the tree, yet somehow survived the ordeal, long enough to be taken into the custody and care of the International Animal Rescue. However, he later succumbed to his burns.

According to RAN, the demand for palm oil increased an average of 2.2 million metric tons each year between 2000 and 2009. Palm oil is commonly used in cosmetics, processed food, biodiesel (it’s the cheapest of vegetable oils to manufacture) and many other products, including a large number of green products. Some green companies, such as Earth Balance, state that its palm oil comes from Roundtable on Sustainable Palm Oil (RSPO) which is an effort to grow sustainable palm oil, though it’s still not the perfect solution. But in total, more than half the products we use daily include palm oil. Many products list it as “vegetable oil,” or one of 200 alternate names including: aluminum stearate, magnesium salts of fatty acids, azelaic acid, calcium lactylate, caprylic acid, glycerin, lauric acid, palmitate and many more.

In reality, avoiding the use of palm oil is a nearly impossible feat, but people can make strides toward lessening the demand. Sites such as Orangutan Friendly has compiled a list of products that are palm-oil free. While the list pales in comparison to the list of products that do likely aid in the deforestation of Indonesia’s rainforests, you can play at least a small role in slowing down the potential extinction of one of our closest relatives.

Here is a BBC clip of the burning incident. Note: the report was made prior to the orangutan’s death.