Home News Coyotes: Can They Be Taught to Live in Harmony? 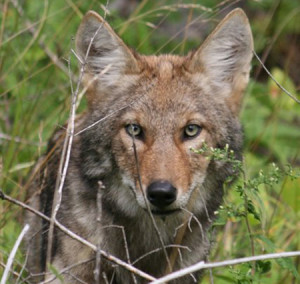 Coyote sightings in residential areas have steadily increased over the past decade. Just this past winter an area deemed a success at co-existing with coyotes saw seven threating encounters between pedestrians and these animals. The rise in population in urban areas is due to the availability of food and shelter. Coyotes will eat pet food, garbage, bird feeders, fallen fruit from trees, and even compost piles. With the close existence of humans and coyotes, attacks on pets make the news regularly. Two states are taking different approaches on how to control and reduce the number of attacks.

In Orange Country the answer may become a plan to euthanize some of the coyote population. Huntington Beach, CA saw 26 pet deaths in 2012. In November, Mayor of Huntington Beach Devin Dwyer, proposed to thin out the population. He was met with extreme resistance from residents and the Humane Society of the United States. This would not be the first time Hunting Beach hired trappers, a similar situation occurred in 2010. Unfortunately, coyotes have the ability to replenish their population therefore negating the reasoning.

Denver and surrounding areas have a different approach. They focus on community awareness and “hazing”. Denver is characterized as a success. The goal is to co-exist with the coyote population. However, just this past winter Denver has seen resistance from the coyotes in accepting the co-existence policy. In late December – January, in Boulder, Colorado, bikers and dog walkers experienced threatening behavior from coyotes. A jogger was bitten in the calf, a cyclist was chased, and a dog-walker was “menaced” for a total of seven aggressive interactions. Ten minutes away in Broomfield, Colorado there were eleven pet attacks in 2012. For town officials the answer is still education and hazing.

What are the awareness programs telling residents?

Will humans be able to co-exist with coyotes without putting our pets at risk? So far, it seems the answer is no.