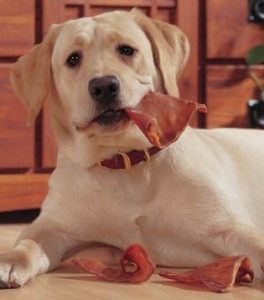 It is always a scary thought to know that as a loving dog owner, you may have mistakenly given your pet something that turns out to be harmful to them.  Hopefully that’s not the case here, but in order to prevent any further effects, this announcement of a dog treat recall is being made.  The product being recalled is Pig Ears for Pet Treats, announced by Keys Manufacturing Company of Paris, Illinois.  The announcement of the recall is due to a Missouri dog handler reporting an illness that is believed to be linked to this product.  The probable contaminant in these dog treats is Salmonella.

The pig ear dog treats were distributed in the following fourteen states, including Arkansas, Illinois, Indiana, Iowa, Florida, Kentucky, Louisiana,  Michigan, Minnesota, Missouri, Ohio, Pennsylvania, Texas, and Virginia.  The treats were packaged in cardboard boxes and shipped between September 27 through October 6, 2010; November 1 through November 29, 2010; and January 3 through January 25, 2011.  The treats were distributed in 100-count cases.  If you know of any of your local stores that carry this brand of dog treats, please do your part and make sure the store is aware of the probable Salmonella problem present.

If you have purchased Pig Ears for Pet Treats from any location, the item can be returned to the retailer where purchased for a full refund.  Any consumers with further questions may contact the company at 1-217-465-4001.

Salmonella poisoning is just as dangerous in your pets as it is to humans, and if not treated can lead to death.  If you suspect your pet has contracted salmonella from these treats, visit your veterinarian immediately, where the first course of action will be to put the animal on IV fluids in order to flush the poison out of their system.  Salmonella is a food-borne pathogen that causes digestive issues and will present itself with these symptoms in your pet if contracted: fever, weakness, diarrhea, and vomiting, or any combination of the four.  Another dangerous aspect of Salmonella is that it can be passed from the pet to the humans in the household, especially if the human has handled the contaminated food.  In particular, chewed food is even worse because the interior is where the poison lies.

The illness can also be spread to other pets in the household, so removing any suspected food is imperative.  If you suspect any of your pets have contracted salmonella poisoning, immediately take them to your veterinarian.