Home Care & Health How to Prepare Your Pets for Cicada-pocalypse 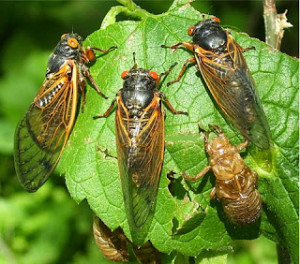 These 17-year-olds are itching to party. And their parties are attended by some pretty large crowds. Try in the tens of billions. Brood II sounds more like a cheesy sequel than a bug species, but that’s just what it is: Brood II are known as periodical cicadas, who stay dormant underground for up to 17 years before coming back to the land of the living, to wreak harmless havoc on us all as they mate in what little adult-time they have.

1996 was the year – the year these crop of cicadas was born. That makes them millennials, having been born in the era of Twitter and Facebook. While these teens probably won’t be social sharing anytime soon (darn those thumbs!) this will be the first time that those of us graced with their presence (that’s East Coasters from Georgia to Connecticut) will be able to provide real-time reports on their infiltration.

Once this crop is gone, their little babies will work their way down into the dirt, where they’ll patiently wait until 2030, when they’ll return again.

But who cares about 2030, when we have 2013 to worry about? What then, can we do as pet owners to prepare our pets for the onslaught of cicadas?

No harm – but foul

I’m not sure what we’d do if cicadas were actually harmful. How could we compete? There’ll be far more cicadas in just one portion of the country than there are people on earth. We’d be in for a real battle. Luckily, cicadas are not out for blood. They’re not even out for world domination (if they were, living underground for the majority of their lives is not a good attack plan). They don’t sting. They don’t bite.

But cicadas, while partying it up all over the place, will certainly have their fair share of party fouls.

Remember when you were yelled at in college for spilling a beer? Well, these teens will spill more than just one cup of beer. Once they work their way back up to the surface, they’ll shed their brown exoskeletons, and just like every other teen out there, they’ll leave their mess wherever they please. That means there’ll be more cicada shells lying around than peanut shells on the floor of a dive bar. It’ll be a nuisance for you, but your pet might think it’s raining gumballs. Except, these gumballs are no good.

These shells (and cicadas in general), contain chitin (also found in lobster shells). If eaten in large quantities, your dog or cat could get sick including experiencing vomiting and constipation, and will need to see a vet.

But it’s not just the shells that are harmful. Dogs can choke on cicadas’ legs and wings as well. You might say to yourself: my dog never eats flies; he’s not about to eat a cicada.

But here are the differences: there’ll be so many more cicadas flying around than there are flies on a typical day, and these bugs like to fly low to the ground. It might be impossible for your dog not to consume some cicadas, which is why it’s important you monitor him during the summer.

If your dog vomits more than twice in the next few weeks, take him to the vet to ensure he did not snack on some cicadas.

Cicadas love to sing. That’s not such a big deal if these little buggers sang solos. But they don’t. They love to sing in choir-like fashion. Eh, so what, you say, who cares about a bug? Well, answer me this: how much do you like standing right next to a motorcycle while it’s running? It’s probably not your most favorite pastime. A loud chorus of cicadas can hit decibel levels of 100, which equals that of a motorcycle.

What’s this mean for your pets? Be sympathetic. Your dog or cat likely never met these cicadas before (if they have, then they’re so old they might not hear anything anymore), so this new sound might freak them out. If your dog sleeps near a window where a loud chorus has congregated, consider moving his bed temporarily. These bugs don’t stick around too long, so it’d only be a temporary change.