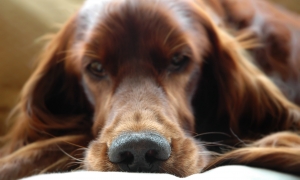 A dog’s sense of smell is one of its coolest features. Its nose can pinpoint bombs, drugs, and, in some cases, the moment a diabetic is suffering from a hyperglycemic event. And now, thanks to the work being done by organizations including a UK charity – Medical Detection Dogs – man’s best friend might be able to identify the odor of one of our biggest fears – cancer.

The creation of Medical Detection Dogs is a personal one for Claire Guest of Berkshire, England. One day she was letting her dogs out, when one of her dogs, Daisy, began to jump and nuzzle her head against Guest’s chest. Guest later went to the doctor and discovered she had breast cancer.

And while critics might assume Guest’s “diagnosis” was a mere fluke, science isn’t quick to dismiss this theory. Three dogs are currently being trained to smell ovarian cancer at the University of Pennsylvania’s Working Dog Center. And the studies don’t end there.

In 2011, a German paper announced that dogs could detect lung cancer in patients with 71% accuracy, and were able to distinguish people without lung cancer with 93% accuracy.

Dr. Cynthia Otto, of the Working Dog Center in Penn., said that we shouldn’t be too surprised by this development.

“Mice can do a better job at sniffing out things (than dogs),” she told CBSNews.com “But there’s an ability to communicate between a dog and a human so they can tell us what they are finding.”

Dogs can help with early detection

According to Guest’s charity, her trained dogs serve two purposes in the fight against cancer. On one hand, her dogs assist scientists in the development of electronic systems (known as E noses) that will be able to help detect cancer with the use of technology that mimics a dog’s sense of smell.

On the other hand, at this moment, cancer dogs provide second-line screening for cancers that are currently difficult to detect, including prostate cancer.

Studies do show that one of the most effective ways to combat cancer, is to detect it early on. While Guest doesn’t suggest her dogs are the cure-all, she does say they can offer another layer of detection, often times long before we, as humans, even think to get tested.

In the case of prostate cancer for example, Guest’s charity suggests that the current PSA (prostate specific antigen) test is unreliable at best, yet studies have shown that dogs can detect this deadly cancer through a urine sample.

“If dogs can sniff prostate cancer from a urine sample the chances are high that from the results of the dogs’ sniffing research, a test can be developed that is far superior to the PSA test,” Guest states on her website.

The UK isn’t the only country to get in on the cancer-detection mix. InSitu is an American-based non-profit foundation dedicated to training dogs to detect cancer in humans. They’ve participated in two federally funded studies to determine the accuracy of canine scent detection for early and late stage lung, breast and ovarian cancer. Their next study aims to focus on early stage pancreatic and stomach cancer. These particular cancers have no screening methods and are almost always diagnosed when it’s too late.

InSitu also believes that one day down the line the e-nose detection device will work wonders, but for now, dogs are doing a remarkable job of doing the detection. InSitu is committed to spreading this awareness and providing people with a way to detect certain cancers far earlier than we currently can.