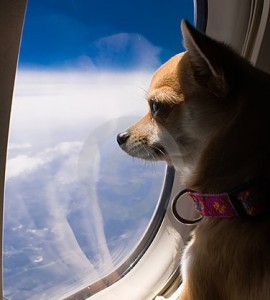 No one feels entirely comfortable when they have to send their pets to the airline cargo for a long flight. We have no idea what’s going on below our feet. Is it bumpy? Loud? Hot. Cold? Are our pets sleeping, freaking out, thinking we’ve left them? But it’s something we have little choice in. We can’t take our dogs and cats with us on our laps, but we want them to come with us to wherever it is we’re headed (or returning to).

While the vast major of animals survive this stressful ordeal unscathed, there are plenty of horror stories out there that may make you think twice about allowing your beloved pet to board a plane with you.

“The airline killed my cat”

Preeti Varma recently got engaged, and had finalized all the paperwork to bring her cat, James Dean, to Singapore (where she moved with her fiancé) from India, where she’s originally from.

The cat never made it on the plane.

Varma was flying with Jet Airways, Ltd., and before boarding, was approached by an employee who said her cat cage was empty. Preeti claims she took extra efforts to ensure James Dean’s carrier was secure, but somehow, before the cat was loaded on the plane, the cage opened, and James Dean leapt onto the tarmac. Video footage shows the cat being run over by a vehicle. The video then shows the cat, barely alive, being picked up from her neck by a garbage disposal man and tossed back into the crate.

While there remains many questions of who is to blame for this incident (some evidence suggests the cat pushed the gate of her crate open, while Varma insists the crate was likely mishandled), one of the most disturbing elements, according to Varma, was how the employees handled the situation. Varma learned about her cat’s death with a simple: “The cage is empty. The cat is no more.” Employees then tried to rush her out of the airport as she demanded to see video footage.

Supermodel Maggie Rizer used to have a blog titled Bea Makes Three, in honor of her Golden Retriever, Beatrice.

This past September, Beatrice died while in flight with United Airlines, on route to San Francisco from New York.

Again, there is debate on if the airline truly was negligent in this case, but one of the most concerning factors was the lack of empathy by airline employees. “One of them is dead,” Rizer claims she was told when she went to receive her two dogs from the cargo terminal.

Even more concerning is that airline employees lied about Beatrice’s whereabouts, according to Rizer. She demanded to see her dog, but was told the dog was sent away for an autopsy. Rizer was upset that she’d not be allowed to choose who performed the autopsy, then discovered a few hours later that Beatrice had been at the airport the entire time.

“Over the next two hours the supervisor’s lie unraveled as it became clear that Bea was right behind a closed door the whole time and he had been discussing how to handle the potential liability with his boss who had left and sticking to the divert and stall tactic that they had been taught,” Rizer writes in her blog.

An autopsy by Rizer’s vet showed Beatrice died of heatstroke.

The dangers of flying

In 2010, seven puppies were found on an American Airlines flight. The flight was targeted for Chicago, but was delayed for an hour in Tulsa. American Airlines protocol declares it will not carry warm-blooded animals if the actual or forecast temperature will exceed 85 degrees, but the temperature in Tulsa that morning reached 86 degrees by 7 a.m.

Heatstroke is a common cause of death for animals flying on planes. The cargo area that carries animals are climate-controlled, but delays that require the planes to power down can affect that temperature. Rizer claims that the powering-down of her plane was the cause of Beatrice’s death.

Aside from heatstroke, certain dogs are at greater risk of being hurt, or dying, while in flight. The department of transportation says that short-faced dogs such as pugs and bulldogs made up nearly half of the 122 dogs that died during US flights over a five-year period. These dogs are more susceptible to breathing problems.

We all know that flying is far safer than riding in a car, but that doesn’t stop many of us from clutching our armrests and holding our breath as we take off on an airplane. It’s still a risk, because an airplane crash is far more likely to kill you than a car crash. But we take this risk because we have to, or because we want to. The same goes for our pets. We know it’s a risk to fly them on a plane, but sometimes we believe there is no other option.

If you’re going to fly your pet on a plane, make sure he or she is in tip-top shape. If your dog is excitable by nature, being on a plane might be deadly for him. Getting too excited could easily lead to heatstroke.

Also, if possible, minimize layovers and transfers. Choose a flight that offers direct service from point A to point B.

Lastly, shop around for the best airline. Ask friends and family members about their experiences, and search online. You may also want to check out Flypets.com. They arrange pet travel to and from most of the major airports in the US.