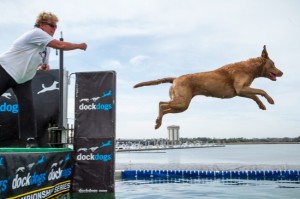 DockDogs burst onto the scene in 2001 in Lake Placid. Pairing dogs and handlers with water in a format that echoes summer cottage dock routines across North America became an overnight success. Now, DockDogs events can be seen on ABC, ESPN, and the Outdoor Channel. According to USA Today, dog sports outperform NFL Sundays. There are currently over 18,000 dock dog teams registered and imitators have sprung up everywhere.

By 2002, DockDogs was ESPN’s Great Outdoor Games top rated sport. At the time there was only one event for competitors to compete in – Big Air. This remains the most popular event for DockDogs competitions. A long jump event, the dog and handler can use up to 40’ of dock space before leaping into a 40’ pool. The distance jumped is measured from the end of the dock to the where the tail set hits the pool.

In 2005, Extreme Vertical was added. If Big Air is the long jump, then Extreme Vertical is the high jump. The dock has up to 20’ of dock space to use before leaping in the air to grab a toy hung 8’ from the dock edge. It starts at 4’6” and is raised by 2” at progressive levels. Then in 2008, Speed Retrieve completed the triumvirate, making the Iron Dog triathlon competition possible. In the Speed Retrieve competition, a bumper toy is suspended two inches above the water at the end of the 40’ pool. The dog again has 20’ of dock space to work with. It is a timed event that begins when the dog leaves the dock and stops when they remove the toy from its bracket. Iron Dog sums the score from the three events.

The rules are not complicated. The dog must enter the water willingly, no coercion is allowed. Handlers cannot enter the water unless required to get their dog out of the water. Dogs can be any breed or combination of breeds but must be at least six months old. Female dogs cannot be on the premises if in season. Handlers must be at least seven years old. A meeting is held to review the rules 20-30 minutes before each wave of competition. Attendance is mandatory for all participants. On the grounds, all dogs must be kenneled or on a 4’ leash and poop and scoop is a must. The entry fee is usually $25-$30/wave and dogs can compete in multiple waves (heats) in a weekend. Dogs with best scores are invited to compete in the weekend’s finals.

There are titles to be won and divisions for veteran dogs (aged 8-10 years), lap dogs (dogs measuring under 17” in height at the withers), and youth handler (handlers aged 7-15 years). Rewards are also given for the highest ranked dogs in individual breeds. Best of all though, it is a ton of fun for dog and handler!