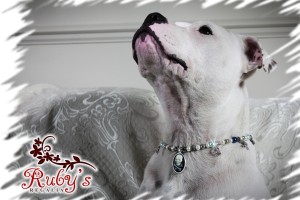 A brand new Hollywood style pet jewelry company has been chosen to produce a special necklace for an upcoming horror film to be shot in 2014.

Ruby’s Regalia opened for business in October 2013 and was immediately chosen by a film company in California to design and create a special dog necklace.

The film will feature a large Rottweiler, who for once won’t be the bad guy.

“We were very pleased that the dog wasn’t going to be shown in a bad light, because so many horror films have done so in the past. This time, the dog is a kind of hero in the film and we were delighted to be asked to create something unique.” Said Ruby’s Regalia spokesman, Brian Johnson.

Although the film is top secret at the moment, much of it will be filmed in the UK with a few top stars already lined up for lead roles.

Ruby’s Regalia has launched with several stylish pet necklaces including some Halloween sets. There’s even pet-owner companion sets for those special occasions. The company, based in Nottinghamshire, England, spent months searching out quality materials and found themselves rejecting an awful lot.

“I think the fact that we were so determined to ensure everything about our products was top quality helped the film company to decide.” Said Johnson.

The film will be set in a strange futuristic world with the lead actors playing horror film fans who have distinct Goth fashion style tastes.

“We had to take into account the characters and their roles in the film because they are the fictional owners of the Rottweiler. We’re working with the Director in the background right now on some extra pieces in the film for the lead actress, which mirrors the dog’s piece and came about through the Producer noticing we actually do make Companion Sets such as a bracelet for the owner and a necklace for the pet.”

In fact, the bling does form a central role in the film and so it was very important to get it right. Official replicas will be exclusively available from Ruby’s Regalia for the pampered pooch and even owner!