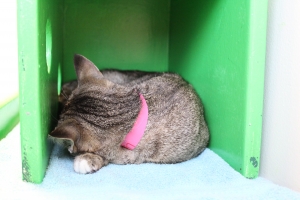 Animal lovers are distraught over drop boxes in use at the Rutherford County Animal Shelter but officials say it may be the best option available. Reports have surfaced about drop boxes being used by the shelter for afterhours drop off of unwanted animals. There are two chutes, one for cats and another for dogs. Many have claimed that it works like a garbage chute and the animals tumble down into a common pen where they are likely frightened and placed in jeopardy from their fellow inmates.

While no one disputes that they are frightened and that it is not an ideal situation, the shelter notes that the chutes do not empty into common pens and that there are only three pens, each of which locks after receiving a deposit. Once they are in use, no further drop offs can be made and it is first come first serve. The idea of dropping animals like garbage is sad and indicative of a terrible view of them and a complete lack of respect. However, it is not the shelter that is choosing to deposit their pet in such a chute, it is the soon to be former owners.

The shelter officials have noted that when the drop box was not in place, animals were left tied to fences, sealed into boxes and containers (where they often perished due to lack of air), or thrown over the barbed wire fence by these same owners. This is starting to make the chute sound more humane, isn’t it?

North Carolina shelters have high rates of euthanization and Rutherford County is currently fundraising to build a no kill shelter, which is highly commendable and shows a definite desire to help the animals in their area. They post available animals to the Facebook page on a regular basis and have posted pictures of the insides of the drop boxes for those that are concerned. They do not look that different from normal pens at an animal control center, they just have a window through which the animals arrive.

There are active petitions being signed to ask the government of North Carolina to ban drop boxes but the real question is, what is being done to ensure that people have enough care and respect for their pets not to make use of a drop box in the first place. How often is a situation so desperate that the owner cannot wait until the shelter is open to drop their animal off? What does this say about how these owners view their supposedly beloved pets? The problem is not the shelter, it is the owners.

There are some counties in North Carolina that automatically euthanize any animal that they cannot prove has received a recent rabies vaccination, including puppies and kittens. This places many on the list to be destroyed that could be vaccinated and placed in new homes. This is a policy that can be changed and could benefit animals.

Rutherford County will need foster homes to assist with the move to no kill shelter status and is always in need of volunteers and potential adopters. You can reach them through their Facebook page.