Home Behavior & Training Help! My Dog’s Afraid of Everything. Global Fear in Dogs and What... 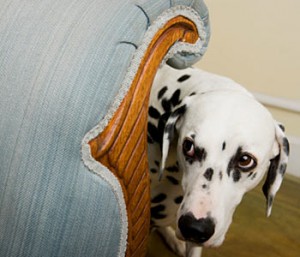 A lot of dogs are afraid of something. Just like you may be afraid of heights, snakes, or your Aunt Bertha’s cheek-pinching ways, dogs can experience these same “tiny fears.”

But there’s a difference between a tiny, isolated fear, and a global fear. What happens if your dog has a fear of virtually everything? If he trembles, is off-standish, and looks like he wants to jump out of his skin at every moment?

Fear is a deep-rooted, carnal instinct. When we, as humans, are afraid, we have the ability to reason with ourselves. But fear in a dog (or any other animal) can, and often does, evolve into something more dangerous, such as aggression. This makes it that much more important that you help your dog if he suffers from global fear.

What do you do when your dog’s afraid of everything?

This is a question I’ve asked myself recently. I volunteer at a vet hospital that also rescues and houses high-kill-shelter dogs. There’s one young pup who, for no apparent reason whatsoever, is absolutely afraid of everything. She’s mistrustful and apprehensive no matter who or what is near her.

She’s the black sheep of the litter. All of her brothers and sisters have socialized nicely with each other, and with the other dogs (and cats ). I’ve seen these dogs since they were 6 weeks old (with their mom in tow), and not one of them has experienced any prolonged trauma.

So what’s her deal? Why does poor Sadie suffer from a deep-rooted global fear?

A good place to start is with the causes of fear.

There are three generally accepted causes of fear:

At such a young age, it’s difficult to accept that Sadie acquired a learned fear of everything. She’s growing up in an overall positive environment, so I’ll cross #3 off the list (although not entirely, as you’ll read below).

She’s getting more socialization at the clinic than many other dogs get. She’s attended to by vet techs, vets, visitors, and so on. She’s walked, has the chance to play with dogs of all sizes and shapes, comes in contact with cats, and more.

So, while genetics isn’t the most common cause of fear in dogs, it appears that in Sadie’s case, her genes have done her wrong.

Just one look at her mom paints a clearer picture. Momma’s since been adopted, but it took her a good two months to gain any comfort with her surroundings. She has a skittish disposition that over time she learned (and was taught) to combat. But while she battled her skittishness, my theory is that the already-predisposed Sadie learned how to be afraid.

But that’s okay, because dogs can be rehabilitated, especially young dogs.

How to help the dog who is afraid of everything

Before you expect your dog to get over his global fear, you need to start establishing rules and boundaries. The best way to do this is to instill positive reinforcement training. Start simple, with Sit, and Stay. What this does is help your dog to focus, even for a few minutes in the day. And it also helps him to establish strong connections with you (treats, leadership, calm nature).

You’ll also want to establish firm routines. This goes for any dog, but particularly with a dog suffering from global fear. This means the same time for feeding, going out, walks, and more. This also means the same routine on the weekdays as well as weekends (or as close to identical as possible).

With a solid positive reinforcement training regiment in place, you can combine this training with your battle against global fear by using the command of TOUCH.

Now move on to something he likes, like his food bowl. Get him to touch the food bowl (then of course give him a treat). When you think he’s ready, move on to new objects, including objects he may have seen particularly fearful of (like a vacuum).

This process takes a long time, like weeks and months, but the goal is to help the dog realize he can become fairly intimate with objects (and people) without being harmed. Better yet, he’ll get rewarded!

Do you have to expose him this way to everything in his world? Hopefully not. Overtime your dog should start to understand that you can be trusted, and that new things aren’t so scary. But be patient. Fear runs deep.

It also starts with you

It’s easy for us to act up when our dog’s are afraid of something. Either we get annoyed, stressed, or perhaps afraid as well. But dogs pick up on this (hey, we got the thumbs, they got the emotion readers), and will follow your lead. Just like Sadie learned behaviors from her mom, your dog will learn behaviors from you. It’s important to remain calm, particularly if you’re in exposure therapy mode. The calmer you are around these objects and people, the calmer your dog will eventually become.