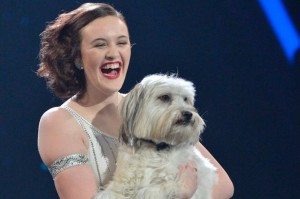 Pudsey was just getting started when he and owner Ashleigh Butler, 17, won 2012`s Britain`s Got Talent show. Their audition for Britain’s Got Talent can be seen on YouTube and has over 12 million viewings so far. This seven year old, mixed breed dog is on a roll. Pudsey recently added author to his list of accomplishments with the publication of “Pudsey: My Autobidography”.

Pudsey was a Christmas gift to Ashleigh from her mother when she was eleven years old. She had wanted a dog for some time and the family felt they were finally ready to take on the commitment to caring for a dog. Tightly bonded to one another, they began competing in agility and canine freestyle and did extremely well.

Canine freestyle is a sport that involves choreographed movements and tricks done to music. Most people who are involved in canine freestyle start off in obedience and agility as many of the elements used in freestyle have their roots in obedience and agility. Crufts, the world’s largest dog show, holds “Crufts Factor”, a talent competition that has gone to the dogs. Competitors upload their videos of their talented pooches to the Crufts Facebook page. Finalists will be invited to compete at Crufts on Sunday, March 10, 2013.

A recent survey of a thousand people by the Kennel Club, in the United Kingdom, found that over a third of them had been inspired by Pudsey’s success to try more serious training with their pets. More than half of the inspired admitted to spending five or more hours a week working on teaching their dog tricks such as dancing, negotiating obstacles, and riding a skateboard or surfboard.

Meanwhile, Pudsey’s fame just continues to grow. He has performed twice for the Queen – once at the Epsom Derby and once at the Royal Variety Performance. She’s also been on the Tonight Show with Jay Leno and rapper 50 Cent has invited them to come to Vegas. He was also spotted in Dick Whittington’s pantomime at Woking, Surrey. More recently, Pudsey hit the stage at the National Television Awards to perform to Psy’s Gangnam Style with Ashleigh and a crew of backup dancers.

All of this fame and fortune may have turned the sweet pooch into a bit of a diva but the bigger concern has been the need for added security. Dognappers would love to get their paws on him. Ashleigh and Pudsey now practise in private parks due to security risks and the lack of privacy in their daily lives. If you want to catch up with Pudsey, try checking out one of the many Facebook fan pages devoted to him or follow his Twitter account.