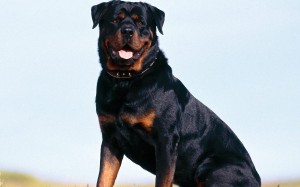 Last week, a Massachusetts 14-year-old was nearly killed by two Rottweilers after jumping a fence at a Boston-area construction yard to play with the two dogs.

The boy (and his 12-year-old friend) had been known to hang out with the dogs in the past, but always with a fence separating them. Never before had the dogs shown any hint of malice toward the boys.

However, that all changed the moment the 14-year-old jumped the fence. Friendly Rotties turned into guard dogs that mauled the boy while his friend frantically called 911. The first cop on the scene began to fire his gun at the dogs to make them stop. He hit one, but the other dog continued his pursuit. It took firefighters spraying the dog with hoses to keep him away long enough for rescuers to carry the boy out of the yard.

The owner of the dogs voluntarily chose to have the dogs euthanized. The boy was severely injured but will survive.

This begs the question, are guard dogs a necessity or a danger?

Joan Klem, former director of the American Rottweiler Club, in response to the Massachusetts tragedy, was quoted as saying, “I imagine the Rottweilers were there to protect the construction site and it would be very difficult for the dogs to know the difference between an intruder and a kid who wants to play.”

Is it wise to have a security system put into place, such as these dogs, that can’t differentiate between innocent children and would-be burglars?

First, one obvious response to this story is: Why’d the kid jump the fence to begin with?

While it’s clear that fences are put up for a reason (to keep things out and/or to keep things in), can we really place blame with a child for acting impulsively?

If we’ve answered no to that, that we can’t expect children to always know what’s right or wrong, then our train of thought leads us to this: are guard dogs a public danger?

There’s a lot of news these days about gun laws, and how important it is to ensure people who carry guns are of right mind and intention. But can we ever truly have that surety with a dog, particularly one who sees his role as guard dog?

And, if that child was a burglar, and not a kid, is being mauled by two 100+pound dogs a fair punishment for trespassing? Does the punishment fit the crime?

Why we get guard dogs

Some of the most popular breeds for guard dogs are the Bullmastiff, the Rottweiler, the Doberman pinscher, and the German shepherd. All of these dogs can (emphasis on can) appear intimidating, just on their size alone.

What does it take to be a guard dog?

Just because you have one of the dogs listed above, doesn’t mean you have yourself a guard dog. In fact, many of these dogs wouldn’t even lift a paw if a stranger walked through your door. In many instances, these so-called guard dog breeds would run to the intruder hoping for some attention.

So, what does it take to be a guard dog? One of the issues with guard dogs is that, unlike service dogs, there is no formal training. Anyone can think they’re properly training a dog to become a guard dog, but if they do it improperly (such as using force and punishment), the results can be devastating. Because of this, there’s much debate about whether guard dogs should be used as a line of defense.

So yes, the dogs did their job, but at what cost? The owner of the Massachusetts construction yard has had dogs there for decades, and never once had police received complaints. It seems reasonable enough that these dogs likely reacted more on instinct than on training. The simple environment they grew up in – everyone stays outside this fence – reinforced an instinct they had to guard their territory.

With surveillance cameras and silent alarms more prevalent these days, the question remains: are guard dogs a necessity, or a danger?