Home Care & Health Is It Healthy For Dogs to be Vegetarian? 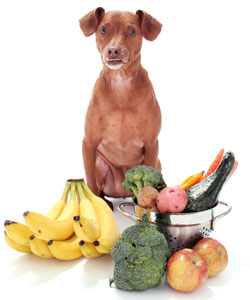 Everyone has a say in what they feel is the best diet for his or her dogs – dry food vs. wet food, human food or not.  At either end of the food-debate spectrum are the all-meat proponents and no-meat proponents. Both factions have their fair share of reasons why their diets are best for dogs. But both arguments have their fare share of naysayers as well. So which is the best diet for a dog: the all-meat diet, or a no-meat diet?

All-meat proponents are typically grouped with the raw-food movement. The raw food movement isn’t anything new. Racing greyhounds and sled dogs are often given raw foods to help maintain astounding levels of energy.  But there was a push for raw foods more commercially in 1993, when Australian veterinarian Ian Billingshurst introduced BARF – Bones and Raw Food diet, or Biologically Appropriate Raw Food. Billingshurst suggested that adult dogs would thrive on a diet of foods that their predecessors (pre-domestication) ate: raw, meaty bones and vegetable scraps. Grain-based commercial pet foods were harmful, he suggested.

But the FDA and many mainstream veterinarians disagree, mainly due to the risk of these raw diets.

Despite some opposition, proponents of the raw-food movement swear by it. They claim that the upside of a raw food diet is that a dog can enjoy shinier coats, healthier skin, cleaner teeth, higher energy levels, and smaller stools.

But there are risks to this raw-food diet, including the dangers of bacteria (to humans and dogs), an unbalanced diet, and the potential that dogs will choke on whole bones.

On the other side of the spectrum are those who believe that their dogs can become vegetarians.

Many human vegetarians want their dogs to share their diet, and so they decide to eliminate all meats from a dog’s life.  Celebrity Alicia Silverstone’s dogs are vegetarian (which, she claims, has helped reduce the dogs’ flatulence). Proponents of a doggie vegetarian diet claim that the ingredients inside animal-inclusive dog foods are horrifying, specifically, that they feature meat from the “4 Ds” – dead, dying, diseased, or disabled animals. Also, many commercial dog foods include meat byproducts, which oftentimes is the equivalent of slaughterhouse waste. By choosing a no-meat diet, you are eliminating potentially harmful meat products from your dog’s diet, proponents claim.

But opponents of this movement remind us that dogs, like humans, need a certain level of protein just not possible in a plant-only diet. The Association of American Feed Control Officials claims that an adult dog’s diet should include 18% protein. And more specifically, certain proteins have different levels of amino acids, meaning that not all proteins are created equal. Providing your dog with the “right” proteins becomes much more difficult if you’re only providing a plant-based diet.

Vets are in disagreement over this movement. Some argue that it’s simply unnatural for a dog to be a vegetarian, while others argue that so long as the diet is balanced with the right kinds of protein, there is nothing wrong with this approach.

Dogs, like humans, are omnivores (unlike cats who are carnivores). They can survive on a diet of either plant or animal origin if it’s balanced and diverse. It seems a diet of all meat leaves a gaping hole in a dog’s nutrition intake, as does a diet of no-meat. Can it actually be possible to healthily keep your dog on either end of the spectrum, or is it best to reside in the happy medium?