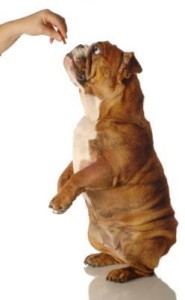 Not everybody will grow up to speak like Martin Luther King, but we all should be able to say a few things well (please, thank you, you’re welcome, etc). The same goes for dogs – not every dog is destined to be top-dog in the park, but there are five tricks that every dog should know, not so much for the “cool” factor, but for his safety and your sanity.

Here are the five tricks every dog should know.

“Sit” is the staple trick. It’s the one we try to teach our dog first, and for good reason. When a dog sits, he’s calmer, and less likely to run off somewhere. When he sits on command, he’s showing you that he can actually listen and obey. Imagine that. “Sit” is a great introductory trick. Sitting is a natural behavior by a dog, and to get rewarded for this natural behavior is, well, bonus. Don’t underestimate the power of this trick. Test your dog in different situations (such as in high-population areas). The more you can hit home the idea of “sit” the easier all of the other tricks will be.

“Sit” really isn’t enough, is it? I mean, “sit” is great to show grandma that puppy is smart. But what good is “sit” if your dog just gets up as he pleases and walks away? “Stay” is the next logical step to go. With “stay” you can increase the amount of control you have over your dog. You can decrease the chances of his getting hurt and you can decrease the chances of his hurting someone else. Wow, what a powerful trick! The combination of “sit” and “stay” is extremely important. When other dogs are walking by, or a car passes by, or a snake slithers around you, “sit” and “stay” are the go-to tricks.

“Down,” or “lay down” is an underestimated important command. Many folks gloss over it since they already have “stay” in their toolbox. But “down” is “stay” on steroids. “Stay” aims to control your dog and calm him down, but “down” or “lay down” is for those times when you really need your dog to chill out. The physical act of laying down actually makes us (humans and dogs) calm ourselves. Also, by laying down, your dog has yet another step to go to before he can get up and run. This means you’re more likely to intercept his run before it’s too late.

Dogs aren’t always by your side (either because they ran off, or because you’ve let them roam free). But you want to be able to have them by your side at a moment’s notice. That’s where “come” enters. Sure, you can call your dog’s name for him to come, but chances are you’ve used your dog’s name for a number of purposes, including to scold him (try not to!). By using a separate word, you’re more likely to see success for this trick, which happens to be one of the hardest to teach. In order to get your dog to come on command, you’re probably going to need to arm yourself with some really high-reward treats during training.

Dogs pick things up. All the time! Sometimes it’s just a ball that we think is gross but causes no harm to your dog. Other times it’s something dangerous, like a dead animal or such. We’ve posted stories here about dogs getting poisoned (in SF) purposely by someone leaving meatballs on sidewalks. You want your dog to be able to leave anything and everything alone, from your neighbor’s cat to the steak that happens to be on the sidewalk (it could happen!). “Leave it” is a great trick to teach during a game of fetch. Don’t toss the toy until your dog leaves it alone. You can also incorporate “drop it” into this as well. Don’t give your dog a treat until he drops the toy. That way you have your bases covered – he’ll leave objects alone, but in case he doesn’t, you can make him drop them from his mouth.

The word “tricks” is a bit misleading. Unlike “high five” or “play dead” or “fetch my slippers,” these aren’t tricks so much as they are actions. Tricks are unneeded. These five actions, however, could save your dog’s life and keep everyone around you safe.