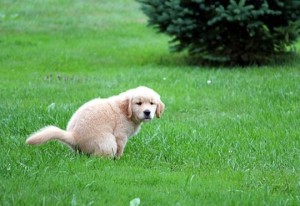 The last thing we think about when we get a new dog is about dog poop. We think about the shots, the leash, the water dish, the food, the bed, and so much more. But we never think about the poop, and specifically, how we’ll dispose of it. But even though our dog’s poop is the last thing on the mind, unless we have a plan for what to do with it, it’s the first thing we notice. Here are four ways to dispose of your dog’s poop that’ll help you avoid one smelly problem.

The pooper-scooper is a staple item in many dog owners’ arsenal, and you’ll often see dog walkers use them. Why? Because nothing’s easier in life than not having to bend down to pick up a pile of poop. It also prevents you from having to wrap your hands around your dog’s excrement, which many people are extremely thankful for.

The benefits of the pooper-scooper are that you don’t need to bend over to pick up the poop (thus it’s great for anyone with physical ailments); you don’t have to touch (or feel) the poop, which some people just can’t handle; and you don’t have to use bags, which can be costly and environmentally unfriendly. These scoopers can range from around $8 to $30 or so, and should last you for many years.

There are cons, however. Namely, what do you do with that poop once it’s scooped? You still have to get rid of it. Either you throw it into your garbage can (which isn’t ideal, because who knows when that can will get emptied), or you throw it into its own special doggie-poo can. The latter is nice, because you’re not mixing smelly poop with the rest of your trash. You can also set aside that doggie-poo can far away from your home or garage, if you have the space. But what tends to happen with that, is your doggie-poo can won’t get emptied for several weeks (at least your regular trash can likely gets emptied weekly), and no matter how far away that can is, the smell is horrendous. You’re also more apt to attract flies with a can specifically used for doggie poo.

Poop bags are also a very common poop-disposal method. They’re likely the most common method. The benefit with these bags is that you really reduce the amount of smell that you’re exposed to. Even if you leave these bags in a can for a couple of weeks, you’ll suffer far less if the poop is wrapped up in bags, than if you just plopped it all in from a scooper.

Of course there are downsides to the poop bag. For starters, unlike the scooper, you do have to get down and dirty. You have to literally bend over to pick up the poop, and you have to wrap your hands around your dog’s finest work. Even the barrier of a bag isn’t enough for many people who can’t accept the idea of getting that close to poop.

There’s also the concern about the environment. When you use poop bags, you’re throwing your dog’s waste in one bag, only to have it go into yet another bag. Sure, there are bags labeled as “biodegradable,” but that’s a bit misleading. Studies show that landfills are so tightly compacted that the two elements needed to make something biodegradable (air and sunlight) aren’t capable of reaching your little bags. Thus, in the end, those bags rarely breakdown. Actually, these bags do a find job of preserving that poop for far longer than it’d survive if not thrown inside the bag.

The last issue with poop bags is the price. They’re not horrifically expensive (let’s say about $10 for 100) but they are a recurring cost. In just a few months you’ll already spend more in bags then you would in buying a scooper that’d last you for years.

Poop and fertilizer go together like pancakes and syrup, right? Well, not necessarily Yes, cow manure does fine as plant food, but there’s a reason why – cows eat plants. Your dog does not. Dogs are carnivores, meaning their poop isn’t the ideal substance for plant food. But with a little ingenuity and work, you can turn your dog’s waste into a lawn’s treasure. The trick is to compost your dog’s poop with other plant materials, such as grass clippings after you mow your lawn. When you compost something, the materials break down over a long period of time, which, can have a downside: you’ll have to endure the smell of your dog’s poop as it breaks down.

However, for those who have the space, the willingness, and the concern for the environment, composting your dog’s poop to make it fertilize-ready is a great method to take.

We dress our dogs up in outfits. We give them haircuts. We pamper them with stays at fancy dog hotels. Why wouldn’t we just flush their poop? In the end, flushing your dog’s poop is one of the most environmentally sound methods to take, without having to endure the effort and hassle of composting it.

But chances are your dog isn’t trained to pop a squat on your toilet, right? So how do you get your dog’s poop from the lawn to your bathroom without using pricey bags or purchasing a scooper (the scooper is a good choice, however)? How about used newspapers or tin foil? Throughout the week we all go through our fair share of newspapers (or ads/circulars mailed to us), bits of tin foil, and more. These things can be reused as transporters from the grass to toilet.

No matter what your preferred method of disposal is, the important thing is to have a plan. Don’t just assume that the poop will take care of itself. You’ll avoid a rather large and stinky problem if you put forth a plan and stick to it from day one.