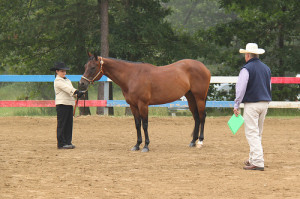 The Tennessee Walking Horse is a beauty to behold. It’s known for its 4-beat running walk and high-stepping gait, so much so, that there exists horse shows that judge these animals based specifically on their trot. But is it worth dousing chemicals on a horse’s legs to get them to walk that way?

According to animal rights activists, including the Humane Society, these horses learn to trot this way through repeated abuse and harsh training. Putting their money where their mouth is, the Society donated $1,000 (the maximum contribution allowed) to the World Versatility Show, which recently took place in Murfreesboro, Tennessee. The World Versatility Show highlights more positive ways to train and show horses.

Soring for the Big Lick

An example of the abuse these animal rights groups are talking about involves soring, which is the practice of slathering chemicals on a horse’s lower legs to get them to step higher. Although that practice is outlawed, the Humane Society released a video in 2011, showing celebrated walking horse trainer Jackie McConnell abusing his horses and depicted the use of soring during training.

Soring isn’t the only practice that has animal rights groups up in arms. One of the most awe-inspiring “tricks” a walking horse performs is known as the “Big Lick.” With the “Big Lick,” the horse raises his forelegs up and forward. It’s fun to watch, but how do trainers get the horses to do that?

The typical method is to “pad” the horse with thick horseshoes under their forelegs, which encourages them to do the “Big Lick.” Animal activists say that method is abusive, mainly because it’s an unnatural action by the horse. During the World Versatility Show and other alternative shows, horses are judged on more natural talents such as jumping and driving. If, however, a horse can perform a “Big Lick” naturally, then more power to him.

The alternative horse show was scheduled for the end of July/early August on purpose – it’s one month before the famed Tennessee Walking Horse National Celebration (now in its 75th year), held at Shelbyville. You can bet the “Big Lick” will be performed there.

Mike Inman, the chief executive of the National Celebration, of course publicly condemns soring, but does admit the use of thick shoes as an accepted practice during the Celebration show. He equated those padded shoes to fancy basketball shoes:

“The difference in equipment and shoeing accentuate the natural ability of the athlete, it doesn’t provide the ability,” he said.

Soring is, by no means, a significant feature in horse training, but the 2011 undercover video shows it does exist, even among the most prominent and respected trainers. While there is much to celebrate at shows such as the Tennessee Walking Horse National Celebration, it is a very good thing that alternative shows, like the World Versatility Show, exist.