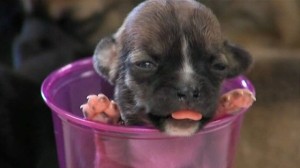 When Beyonce, the dog not the singer, was born, no one thought she would make it. Weighing less than an ounce, she was not breathing and was so small that she fit on an iPhone. Her mother, Casey, was a dachshund mix that had been found as a stray. Pregnant and too far along for an abortion, the shelter that had her scheduled her for euthanization. The Grace Foundation of Northern California, a last chance rescue group, volunteered to care for her until her litter was born.

When the time came for Casey to have her litter, they brought her in to the vet. Beyonce was the last of five puppies born and she was not breathing. Significantly smaller than her normal sized siblings, they had expected a still born puppy based on her size in the pre-whelping x-ray. Although incredibly small, she otherwise looked normal. The vet, Dr. Michael Russell, and Grace Foundation volunteer Beth DeCaprio, managed to resuscitate her with heart compressions and mouth-to-mouth artificial respiration.

Abnormally small puppies often do not survive the first few weeks of life. They are extremely susceptible to slight changes in temperature as puppies do not have full control of thermoregulation at birth. They must be kept warm. If they get too cold, they cannot digest their food. Diarrhea is also a serious concern in a small puppy as they can very easily become dehydrated. Beyonce was given her name for the song “I Am A Survivor” by the singer Beyonce. It was hoped she would be as feisty as her name suggested and survive against the odds.

On March 8, 2013, Beyonce celebrated her first birthday. She is now fully grown and weighs approximately three pounds. She remains with the Grace Foundation but is now an active ambassadog on their behalf. She tours the United States, educating people about spaying and neutering.   She heads up the “SNAP to it” program (Spay Neuter Adopt and Protect). Her “I’m A Survivor” fund raised enough money to save over 200 animals from euthanasia at shelters last year.

Beyonce is a healthy and happy, not to mention adorable, dog. Unlike many tiny dogs, Beyonce was not bred to be small. Her littermates are the size you would expect a dachshund cross to be and at three pounds she is certainly not the smallest dog alive. She is likely one of the smallest ever born to survive though. It goes to show that birth weight and adult weight are not necessarily correlated. She is also a fantastic example of what love and care can accomplish.

Unfortunately, many shelter dogs never get the opportunity to find what Beyonce has. Millions of dogs die every year due to shelter overcrowding. Many of the dogs that come in to shelters are intact. Spaying and neutering can make a substantial difference to the overpopulation issue. If you are interested in helping or making a difference, tiny Beyonce’s survivor fund accepts donations which go towards saving dogs and cats about to be euthanized due to overpopulation.

Raising a litter is hard work and done right, it is expensive. Good breeders don’t make money. If you are not willing to invest the time, money and effort into doing it right, do the world a favour and spay or neuter your pet to prevent unwanted pregnancies.