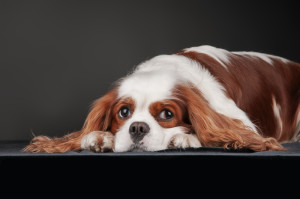 This was inspired by a true story with an unhappy ending.

It began with a simple question to a neighbor in my building: “How’s your dog?” But the answer was far from simple, or expected. Rather than the typical “Good, good,  full of energy,” my neighbor thinned her lips, creased the newspaper she held, and let trickle out: “We have to put him down on Monday.”

If you’re like me, your first reaction was to wonder what ailment befell this poor dog, who was only around 14 months old. But there was no sudden illness, no traumatic injury or constant pain. The reason my neighbor had to put her dog down was because, after months of anguish, and living in fear, she and her husband decided they could no longer handle this dog’s tendency toward viciousness.

The dog’s anger issues were not news to me. But for all the times I heard that this dog would lunge at other dogs and nip at his owners, I never once saw it myself. In fact, what I did often see, from the window in my home office was the dog, and my neighbor’s husband, playing fetch in our common-yard, every day.

That’s not to say that he couldn’t flip a switch and turn dangerous at a moment’s notice, but it was clear to me that this dog had a decent side to him as well. I do believe that with patience and training, the dog could be a great pet.

Did I tell my neighbor this as she poured her heart out to me? No, I didn’t. I did not think it was the time or place to essentially critique the decision she likely lost sleep over, and demand that my opinion was correct – that all dogs can be saved. So I watched Monday morning, again from my window, as my two neighbors, and their dog Seamus, left for the vet. When they returned hours later, Seamus was not with them.

Do I feel guilty for not speaking up on behalf of Seamus? Yes, but there are only so many battles you can wage, and I was not ready to kick my neighbor while she was down. Instead, I chose to write this article in hopes that anyone who is considering euthanizing a dog because of the dog’s tendency toward viciousness might read it and realize that there are other options. Here they are:

There are other options

None of these options listed above are guaranteed alternatives, nor can I say that they consume less of your time than euthanizing your pet. But I do believe it’s worth going through this list first before deciding to euthanize your dog. We are talking about a living being, right?

Now, to be fair, some people live with an animal that is so aggressive and dangerous, that any additional day with that dog could be disastrous. What I recommend is you contact your local shelter (or the shelter that you got your dog from). Tell them that you are looking at places to send your dog, rather than euthanizing him, but in the meantime can’t keep him at your home. Your shelter will likely work with you in order to house your dog in one of their runs or kennels while you seek out alternatives. If you offer to provide his food, that might even make it easier for them.

Not every dog can be saved, I know this. But every dog really deserves a chance before we decide to put them down. I just think of the Seamus I knew – a friendly dog that never showed any signs of viciousness. Some dogs are bad, yes. But all dogs have good in them.