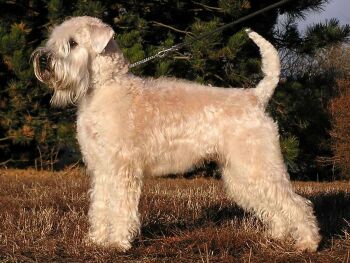 In honor of St. Patrick’s Day, the American Kennel Club celebrates eight Irish dog breeds, all of which have something unique about their history.

“The rich and vibrant culture of the Emerald Isle extends beyond art and literature and touches the very foundation of some of our most devoted and fun-loving dog breeds,” said AKC spokesperson Lisa Peterson.  “Many of these breeds have been warming our hearts and souls for much of AKC’s [ ] history.”

Glen of Imaal Terrier – Glen of Imaal, which is a valley in the Wicklow mountains, is the region in Ireland after which this hardy breed is named.  Longer than tall and sporting a double coat of medium length, the “Glen” possesses great strength and conveys the impression of a dog of good substance.  The Glen can be a docile companion for families with older children.  Recognized by the AKC in 2004, the Glen of Imaal is one of the newest AKC breeds.

Irish Setter – The Irish Setter was among the original breeds recognized by AKC at its inception in 1884 and is part of the Sporting Group. Irish Setters require a good amount of exercise to satisfy their breed instincts; they are tough and tireless field retrievers.  They are also loving companion dogs who enjoy the company of children.  It takes about three years for this breed to fully mature into adulthood, so if you’re considering bringing an Irish Setter into your home, you should be prepared for an active, fun-loving dog.

Irish Terrier – Irish Terriers were used to transport messages between troops on the front lines in World War I.  Their bravery and spirit make them incomparable pals, and they possess great tenacity.  Loyal and friendly, Irish Terriers adapt to any situation, and they are deeply committed to their owners.  Irish Terriers served as longtime mascots for the Notre Dame Football team, providing halftime entertainment for adoring crowds.  The Irish Terrier was first recognized by the AKC in 1885.

Irish Water Spaniel – This breed was among the original 9 breeds recognized by AKC in 1884.  It has been referred to as the “Shannon Spaniel,” the “Whip-Tail Spaniel,” and the “Rat-Tail Spaniel.” Distinguishing characteristics are a topknot of long, loose curls and a body covered with a dense, crisply curled liver colored coat, contrasted by a smooth face and a smooth “rat” tail.  This ancient breed is a natural water dog.  Irish Water Spaniels are devoted to their family and cautious around strangers.

Irish Wolfhound – Irish Wolfhounds were documented in Rome in the year 391 A.D., where they were presented to the Roman Counsel as gifts, which “all Rome viewed with wonder.”  This is a swift breed which hunts by sight, and needs an ample, fenced yard to accommodate its full gallop.  As in early times, Irish Wolfhounds possess an extraordinary social temperament, as well as the intelligence to separate friend, family and foe.

Kerry Blue Terrier – The “Kerry Blue” hails from the Irish county of the same name; he had been purebred in that section of Ireland for more than a hundred years.  Known for his superior working and hunting skills, the Kerry Blue is used for hunting small game and birds, and for retrieving from land as well as water.  In some instances in England, he has even been used for police work.  The breed was first recognized by the AKC in 1922, and came into the national spotlight when CH. Torums Scarf Michael won best in show at the 2002 AKC/Eukanuba National Championship.

Soft Coated Wheaten Terrier – A truly Irish breed, the “Wheaten” has a special connection to St. Patrick’s Day, having first appeared in the show ring at the Irish Kennel Club Championship on March 17, 1937.  The name of this breed describes the characteristics of the coat—soft, silky, with a gentle wave, and of warm wheaten color.  Underneath is a formidable dog that enjoys plenty of exercise every day.  Most Wheatens are natural greeters towards people, and extremely alert in their surroundings.  These dogs are quick learners and love to travel with their owners.  The Soft Coated Wheaten Terrier was first recognized by the AKC in 1973.

Irish Red & White Setter – This breed is thought to have emerged at the end of the 17th Century in Ireland, and is red and white in color, as opposed to the solid red Irish Setter.  The history of the breed is as mysterious as the myths and legends of the country of origin.  Its original purpose was as a versatile hunting companion, providing food for the table, both fur and feather.  As companions, they are loving, loyal and best suited for a very active family.