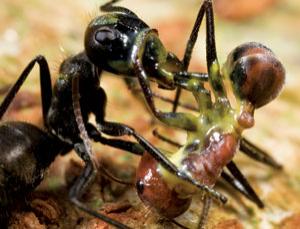 In the wild, animals are in a constant battle to eat and avoid being eaten. It is often referred to as the predator-prey arms race because each time one develops a new adaptation, the other has to work to overcome it. Most people are familiar with poisonous animals such as snakes and poison dart frogs. Obviously the claws and teeth of many animals also provide a formidable defense. In some cases, such as the elephant, sheer size, can work pretty well too; but some species have developed some very unique ways of outsmarting their prey and their predators.

The slow loris is one of the few mammals to use poison. It has glands on its elbows that contain a toxin which often causes anaphylactic shock in those that ingest it or otherwise get it into their bloodstream. They rub the secretions from this gland on their young to deter would be predators. When attacked, they will also rub it in their mouths so that it enters the wounds of anything that it bites.

Sea cucumbers can squeeze into all kinds of narrow spaces because their body wall is quite soft. If that doesn’t work, they will turn themselves inside out, throwing their digestive acid at the predator at the same time.

When you think of dangerous claws, you likely think of bears, big cats, and other big predators. Have you ever thought of a frog? The hairy frog is an African species that is about 4.3 inches in length. When under duress, he takes the phrase “no pain, no gain” to new extremes by breaking a bone in his foreleg, allowing a cat-like claw to protrude from his skin and be used against the enemy.

The horned lizard has control over the pressure in his sinus cavities. When facing the enemy, he increases the pressure until it causes the blood vessels in his eyes to burst, spraying blood at his foe. Like the frog, that seems extreme; at least until you look at the Malaysian ant. Ants are eusocial animals. This means that different individuals hold different roles in the colony and may even have different body structure.

When the enemy is in pursuit, the Malaysian ant employs what is best described as a suicide bomber. Some of the ants turn around and head in the direction of the predator. As they charge towards their pursuer, they contract their abdomens, increasing the pressure being applied to poison glands that run the length of their bodies until they explode. Yes, I said explode.

Animals employ all kinds of unique defenses to avoid predation and increase their odds of catching a meal. Some of them take it to new extremes that you might not expect.