We’ve all seen and have been impressed by the on-screen heroics of dogs such as Rin-Tin-Tin, Lassie, and Cujo. Okay, fine, Cujo was less than heroic, but the dog could sure act. But anybody can make a dog pretend to be a hero. It is when man’s best friend goes out of his way, without fear for self-preservation, to save a life, that we can’t help but let out a collective sigh and look to our own dogs, wondering if they have it in them to save our lives one day.

While our intent is not to have you second-guess your dog’s best intentions, we do think the many dogs out there who have donned cape and spandex to thwart the evil doers of the world deserve a little bit of attention. We call this the top 5 list, but really, any dog who’s saved a life deserves accolades. And there are hundreds, if not thousands of these stories out there. These five represent all that is good about dogs, even your dog, over there on the couch, licking himself. You never know – he might have hero inside of him too. 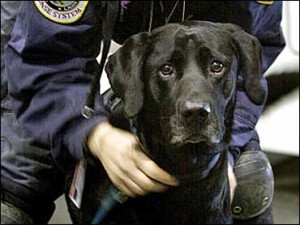 1. Jake – You don’t have to delve too deep into the subject of heroic dogs before you find the story of Jake, an American black labrador who served as a search and rescue dog during some of our country’s worst moments – 9/11 and Hurricane Katrina. Jake was a bonafide hero in NYC after helping to find human remains through the rubble. He was treated to steaks at upscale restaurants and revered by the city. Of course, like other rescuers, he was exposed to the hazards of Ground Zero, such as polluted air. Still, he helped find survivors in the Gulf Coast after Katrina, then, in his later years, trained younger dogs before retiring in 2006 due to cancer. He died in 2007. 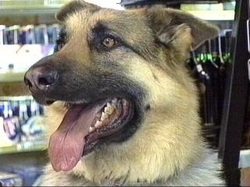 2. Moti – File this one under “you’d probably not do the same for your dog.” Moti was a 5-year-old German Shepherd back in 2007 when he took a bullet for his family. A masked intruder broke into his owners’ home, and Moti reacted the way any vigilant German Shepherd would – he began to bark to sound the alarm. The barking captured the armed intruder’s attention, who shot Moti then took off. Luckily Moti survived the ordeal, and his family never had to encounter the burglar.

3. Yogi – Well, when you have a name like Yogi, you’re bound to do great things. It’s like calling your child Superman, Einstein, or Jeeves – you have expectations of what they’ll become. Yogi isn’t just the term for an altruistic monk, but also a mighty fine baseball player. So, Yogi the Golden Retriever had a date with destiny. Yogi’s owner, Paul Horton, was 59 back in 2010, when he had a terrible biking accident. He and his dog Yogi went for a bike ride (Yogi running alongside), when Horton flipped over his bike, and slammed headfirst into pavement. He was knocked unconscious. When he came to, his dog Yogi was still by his side, eager to get home. Horton tried to get up and discovered he couldn’t move his legs. Horton did the only thing he knew to do – told Yogi to “Go get Shearon (Horton’s wife).” Yogi did not want to leave Horton’s side, but after 45 minutes, finally listened to the command and took off. Horton’s neighbors noticed Yogi running alone down the street, which they found strange. Yogi acted sporadic, as if they were trying to lead the neighbors somewhere. When they decided to follow him, Yogi led them straight to Horton, who was struggling with consciousness. The accident left Horton paralyzed, but things could have been much worse, if not for Yogi.

4. Trackr – Like Jake, Trackr was a search and rescue dog after 9/11, and like Jake, had to endure the harsh pollutants and debris scattered across the wreckage. Trackr is accredited with finding the last remaining survivor of the attacks, having dug 30 feet through wreckage and unstable debris to complete his mission. The Canadian-based German Shepherd was heralded as a hero. Yet, like so many other heroes during those days, Trackr’s later years were marred with physical deformities (the loss of use of his back legs) that were likely agitated by the effects of the debris post-9/11. 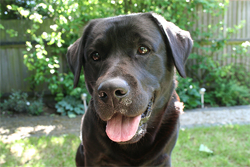 5. Nellie – Nellie was a four-year-old hearing dog who lived with severely deaf owner Gill Houghton, in England, when an intruder broke into Houghton’s home. It was the middle of the night, and Nellie woke her owner up. Houghton, thinking Nellie was a bit mistaken, told the dog to go back to bed, but Nellie insisted on getting her owner’s attention. She then dropped to the floor, which was the signal for emergency. Once Houghton put on her hearing aides and got up from the bed, Nellie immediately jumped onto the bed and sat between the children and the door, as though to protect them. Houghton was able to scare the intruder away, but not without the help of Nellie.