The phrase Man Bites Dog usually refers to how unusual stories make headlines over typical stories. Who cares about “dog bites man” if you have a story like “man bites dog?” The problem is, man doesn’t usually bite dog, does he? Hence why when it does happen, it captures our interest. Below are the top 4 actual Man Bites Dog stories 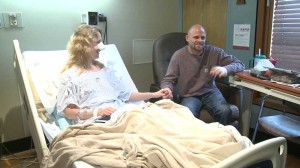 Man bites dog, saves wife: This top 4 list was inspired by an event that just happened a few weeks ago. An Iowan couple was walking their pet beagle when a Labrador mix ran into the street and attacked them. The dog bit Caren Henry in her abdomen and thigh, and began to tear off her nose. Laine Henry, her husband, was bitten on his arm as he tried to stop the attack. His efforts were ineffective until he decided to bite the dog in the nose. The dog eventually let go of Laine’s wife. Caren hopes surgery will repair her nose, and the dog is under a 6-week quarantine (Dallas County, Iowa does not have a vicious-dog ordinance that requires euthanasia or criminal charges against the dog’s owners)

Mailman gets revenge: Man bites dog is anything but cliche. However, dog bites mailman is as cliche as it gets. Perhaps that’s what inspired one UK postman to take action. Back in the late 1990s, London officials were faced with an interesting ordeal: a postman admitted to biting a dog, but in self-defense, he claimed. The postman told officials that over the years he’d grown tired of dog attacks, and decided to get his own dog as self-defense. But one day, he left the dog at home. On this day, of course, a dog on his route decided to attack him. Rather than run, he told officials that he did what he believed his dog would do: he bit the animal. Many postmen rallied in his support. 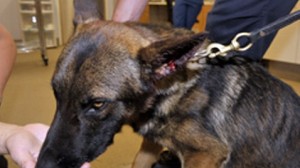 Man acts like Tyson, bites dog’s ear: Police officers put their life on the line every day. That holds true for K9 dogs as well. In North Carolina last year, Maxx, 2, a then-rookie cop, was rushed to the vet’s office after having his ear nearly split by Travis Glaspie, who admitted to biting the dog. “I ain’t never been bit by a dog or nothing, so I bit the dog on the ear,” Glaspie told WECT.com in a jailhouse interview. Glaspie was being served a warrant at the time of the attack. His impromptu Mike Tyson moment added a world of hurt on his future: K9 dogs are considered law enforcement agents under N.C. law, meaning by biting Maxx 2’s ear, Glaspie faced a number of charges, including felony assault on a law enforcement animal. Maxx recovered just fine.

Spice forces man to eat dog: We saved the absolute most horrific story for last. Last year Michael Daniel of Waco, Texas was charged with cruelty to a non-livestock animal for beating and strangling his roommate’s dog, then chewing hunks of flesh from the dog’s body. His housemates called police and claimed Daniel was going crazy. When police arrived on the scene, Daniel had blood and fur around his mouth. The dog was lying dead in his lap. Daniel claims that Spice was the culprit. Spice, or K2, (often sold as incense) is a synthetic drug that’s supposed to mimic the effects of marijuana. His family claims that Daniel is a loving father and uncle, and that this incident was so far removed from him as a man. They agree that the synthetic drug gave Daniel what he referred to as a “bad trip.”

Man bites dog doesn’t happen every day. But when it does, it makes headlines. Hopefully man and dog will spend less time biting one another, and more time trying to work out their issues.