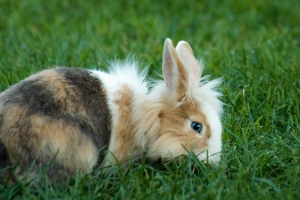 No one can deny how adorable a bunny really is, especially a baby bunny. And there seems to be no better time than the spring, especially around Easter, to introduce a new rabbit into your family. But before you head out to your local pet store or animal shelter, you should consider how difficult it can be to properly care for a rabbit. Otherwise, you could make a purchase you’ll end up regretting.

They’re Not Easy to Care For

Although some pocket pets are surprisingly easy to care for, rabbits can be challenging. In addition to buying a diet that’s properly balanced, you’ll also need to provide your pet with plenty of grass hay every day. Green, leafy vegetables are a great supplement, while pellets should only be given in small amounts.

The bedding in your pet’s cage needs to be changed quite frequently or else strong odors will occur. You can, however, attempt to litter box train your rabbit by placing a small box in the corner of his enclosure where he typically goes to the bathroom. Fill the box with newspaper, grass hay like Timothy hay (avoid alfalfa), or even pellet litter made of newspaper.

They Need a Lot of Space

In addition to a large enclosure that’s at least 4′ wide, 2′ deep, and 2′ tall, you’ll also need to rabbit-proof an area of your home so that your pet can come out of his cage and get some much-needed daily exercise in the form of jumping and running. Rabbits will chew on anything they find, though, so taking steps to remove or cover items you don’t want destroyed, especially electrical wires, is key.

Never leave a rabbit outside, and don’t let your rabbit exercise outside either. They’re very fast, prone to burrowing under fences and getting away, and can become victims to a variety of predators.

Most of the time, a rabbit isn’t the ideal pet for small children. Bunnies don’t typically like being held, and they may squirm and kick their legs to get away from someone’s grasp. This can result in a child dropping the animal, resulting in severe injuries. And it can also lead to a very frustrated and upset child. After all, kids want to have pets that they can handle and cuddle with.

Bunnies Do Their Own Thing

Rabbits aren’t very social creatures, so even adults who are looking for a companion animal they can interact with will be disappointed with the fact that a rabbit prefers to do his own thing. If you like to observe your pet without getting in his way, a rabbit may be right for you. You should also keep in mind that it’s difficult to train rabbits, and attempting to discipline them is never a good idea because it will make them fearful and result in defensive biting.

A pet rabbit is a long commitment, as the average lifespan is 7-10 years. If you’re ready for the responsibilities of caring for one, though, consider adopting one from your local shelter. There are many in need of homes each year, especially when Easter bunnies are returned because they’re more than people bargained for.