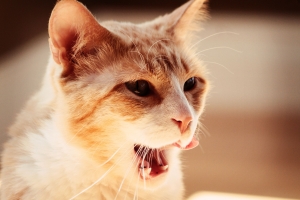 Unlike dogs who wag their tails, smile, whimper, and give other pretty obvious clues about what they’re feeling and thinking, cats can be a lot harder to read. But, according to the Humane Society, there are many ways that cats tell their human companions exactly what’s going on in their minds. You just have to know what to look for in their body language and vocalizations.

It’s All About the Eyes

If you observe your cat closely, you’ll notice that his eyes are one of the primary indicators of his emotions. If the pupils are fully dilated, he might be scared and may do what it takes to defend himself, so beware. On the other hand, if they’re only slightly dilated, he might be a little uneasy and needs some reassurance that everything’s okay. And if the pupils are constricted, he may be on the offensive and ready to get aggressive. However, constricted pupils could also indicate contentment, while dilated pupils could indicate playfulness. Therefore, how relaxed the eyes are can also clue you into your cat’s mood.

As you can see, the eyes of a cat can tell you a lot, but they don’t tell you everything you need to know, so you should also be aware of how to read the rest of the face and body.

When your cat’s ears are facing forward in a normal position, he’s calm, happy, alert, and interested in what’s going on. If the ears are moving around a lot, that means he’s trying to take in every sound in the environment. But if the ears are flat, facing backward, or sideways, you have an uneasy cat who may be angry, scared, or irritated. So if you have a cat whose ears are down and whose eyes are fully dilated, you need to take steps to calm him down and keep yourself safe from a potential defensive attack of claws and teeth.

Cats don’t just use one standard “meow” to communicate; they have a variety of sounds they use to let you know how they feel. Depending upon the tone in your cat’s voice, you can determine whether he’s giving you a command, letting you know he’s frightened, greeting you, or telling you he’s had enough and he’s getting angry.

Purring certainly can signify that a cat is content and comfortable, but a lot of people don’t know that cats also use purring to soothe themselves when they’re frightened or when they don’t feel well. Many cats in shelters purr, even before they’re euthanized, because they’re frightened (another great reason to adopt your next kitty rather than shop for one).

If your cat is yowling, this means he’s in distress or in pain, so definitely try to figure out what’s wrong and bring him relief. On the other hand, if your cat is growling or hissing, these are signs that your cat is angry or scared to the point that he’s going to attack given the opportunity, so keep your distance.

These are just a few of the many clues that cats give humans in order to communicate with them. It’s all about body language and understanding your cat’s unique vocabulary. Once you comprehend the basics, you’ll know how to assess the feelings of any cat you meet.