Home News A Look Into Apes at US Zoos 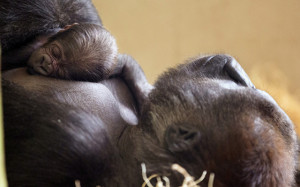 The world is going ape! Though many of the great apes are endangered in the wild, they have been having a bit of a baby boom in United States Zoos. Sadly, while many primates breed well in captivity some have rejected their new offspring for reasons unknown. Thankfully, dedicated zoo staff have stepped in and are caring for the new apes that would have died in the wild.

Nayembi, a three month old gorilla at Chicago’s Lincoln Park Zoo was attacked by another ape in her family group and required reconstructive surgery for facial injuries. She is now in stable condition but will require further medical treatment. It is not known what provoked the attack.

At the Atlanta Zoo, zookeepers had to step in when Sandar, a Sumatran orangutan, was rejected by his mother with a few days of his birth. Orangutans cling to their mothers from the beginning and are constantly with them. A team of nurses and zookeepers are doing their best to mimic these conditions for Sandar by carrying him constantly except when changing his diaper. They wear their hair down to give him something to cling to.

Cincinnatti zoo workers are doing their best to get another rejected ape, Gladys, a one month old gorilla, ready for a surrogate mother. Her keepers have donned ape costumes and furry vests to mimic the new mother. They also behave in an ape-like fashion by grunting, knuckle walking and imitating other ape behaviors.

Although many zoos have successfully bred both orangutans and gorillas, rejection by the mother does occur. It is unknown if this is an effect of captivity or would have occurred in the wild too. Sandar’s mother had previously successfully raised another baby. Nayembi was not the first baby gorilla for the Lincoln Zoo family group either. They have a second baby, Patty, there that was born only a month earlier. Some believe that mothering is not necessarily instinctive but that instead it is something that is learned and may be harder for captive born animals to learn from their social circle. But that does not explain why a mother that had successfully raised offspring in the past would reject a new baby.

We celebrate apes and the successful births. Little Rock Zoo held a baby shower for new gorilla mom Sekani last year. Given the problems facing their wild brethren, captive born zoo animals may soon be the only apes the public gets to see. Some zoos have successfully returned captive born apes to the wild but such cases are few. Luckily zoo staff are dedicated to saving babies that have been rejected by their families and hand-rearing them until they can be reintegrated to their social groups or set up with a surrogate mother.